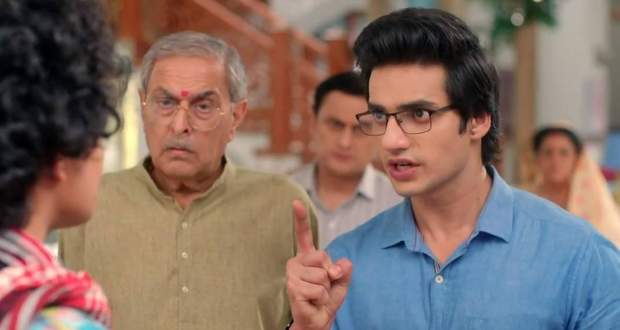 On the other hand, everyone gathers and tries to devise a plan to help Karishma. Overhearing them, Mithai comes up with her plan.

Gunjan cunningly stalls everyone who tries to sneak into the kitchen.

Harimohan introduces Mithai who touches the guest's feet. Mithai asks for permission and runs out of the house.

Mithai hangs onto the kitchen window grill and instructs Karishma.

In the garden, Siddharth is furious at being locked out and swears to teach Mithai a lesson. Not finding another way in, Siddharth jumps over the fence wall.

Here, Mithai slips and begins to fall, but is caught by Siddharth in time.

Siddharth begins to complain about Mithai's actions but is distracted to see Karishma in the kitchen.

Karishma and Mithai explain everything to Siddharth, who disagrees and advises Karishma to confess the truth.

Karishma pleads with Siddharth to let her pass this test or else she won't be able to marry Rohan and leave for the USA. Regardless of his disagreement, Siddharth leaves for Karishma's sake.

Since Karishma was taking a long time, Gunjan volunteers to take a look, but Karishma brings the food.

Gunjan is impressed at Karishma's cooking but Siddharth blurts out that Karishma prepared the food by Mithai's guidance.

Mithai steps in and saves the day by stating that Karishma was the one who prepared the food.

Gunjan agrees with Mithai and everyone takes a breath of relief. Furthermore, Gunjan accepts Karishma as her daughter-in-law.

While everyone celebrates, Karishma and Rohan steal glances at one another.

Here, Siddharth stares at Mithai in amazement as Karishma sings a melodious song.

Next up, Rohan narrates poetry but gets stuck in between, when Keerti completes the other half they both bond over a shared interest.

The next day, the ladies and Harimohan prepare sweets for the Holi Dehen. Aabha thanks Mithai for helping Karishma on the last day.

Mithai confesses that she will miss the environment at the Choubey house after returning to Jaatipura.

In his office, Siddharth gets emotional while looking at Aarti's pictures. He is interrupted by Apeksha who insists on going to Choubey's house.