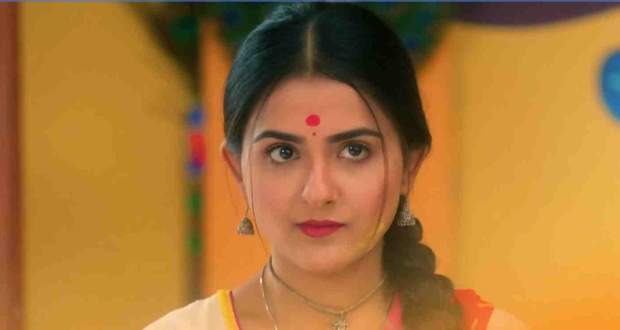 Today's Mithai 15th April 2022 episode starts with Mithai scraping the stuffing out of a veg puff and adding aloo jalebi to it.

Keerti carries the tray to Siddharth who was busy chatting with Apeksha and her mother.

Apeksha gets astonished at how Siddharth could let some stranger live in their house and warns Siddharth regarding his involvement in Mithai's life.

Keerti enters with the tray and Rajiv force-feeds the sweet puff to Siddharth.

Everyone runs for their life before hell breaks loose.

Although Mithai wants to see Siddharth's reaction she runs and joins the rest of them.

Everyone drowns their worries as they resume playing Holi.

Mithai spots Harimohan and Chandrakanta and runs to inform them of her great deed without knowing that Siddharth is marching toward her with wrath in his eyes.

Mithai stops in her tracks at Siddharth's expression and gets an earful.

Geetika tries to meddle but accidentally squirts color all over him.

Siddharth finds it useless and storms off to complain to Indu.

In the room, Siddharth finds Indu passed out on the floor and calls for the doctor who advises them to see a heart specialist.

Harimohan and Siddharth keep the news a secret from Mithai and everyone else.

Siddharth is reminded of Arti while Harimohan assures Mithai that Indu will be up and running in no time but they must consult a specialist for further assurance.

Later, Siddharth goes to check up on Indu and tells her to not ignore her health and promises to take her to the doctor the following day.

Standing on the balcony, Siddharth gets emotional looking at a picture of Arti and receives a call from Apeksha.

Siddharth mentions missing the next day's meeting for some important work which makes Apeksha gain suspicion.

Even though a little hesitant, Mithai knocks on Siddharth's door and asks whether Harimohan and Indu are hiding something from her.