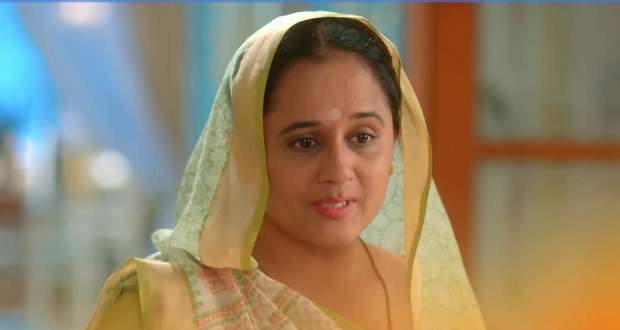 Today's Mithai 19th April 2022 episode starts with Mithai asking Harimohan if he has been hiding something from her.

Capitalising on Mithai's answer, Harimohan convinces her to stay in Mathura longer.

Sitting in the Garden, Siddharth is reminded of the quarrels between Girish and Arti and he can't help but be repulsed by the idea of marriage.

Later, Keerti knocks on Siddharth's door and asks if Indu's reports are fine or not.

Keerti is happy that Siddharth is involved in Indu's life and cares for her well-being. The next morning, Chandrakanta can be seen preparing a video regarding the process of Sankashti Chaturthi pooja.

Geetika comes home and Chandrakanta tells her about Indu's illness and warns Geetika to not mention anything to Mithai.

On the other hand, Apeksha keeps remembering Siddhartha's rejection and Deepti tells her to pursue her love by emotionally connecting with the Choubey family so that Siddharth sees her as a family member.

Mithai informs Indu that everyone will be preparing ladoo together and despite Geetika's concern, Indu insists on helping them.

Annoyed by everyone's commotion, Siddharth descends the stairs but stops in his tracks after seeing Mithai and Indu.

Apeksha enters the Choubey house and picks her chance to show everyone that she can be the perfect daughter-in-law that the house deserves.

Having a completely deterrent upbringing, Apeksha only makes a fool of herself.

Mithai tries to assist Apeksha but ends up aggravating her more.

Here, Girish goes to Dimple to pick up their agreement papers and praises Apeksha's and Siddharth's bonding.

Dimple joins in by stating that Apeksha and Siddharth have been friends for 10 years and understand each other well.