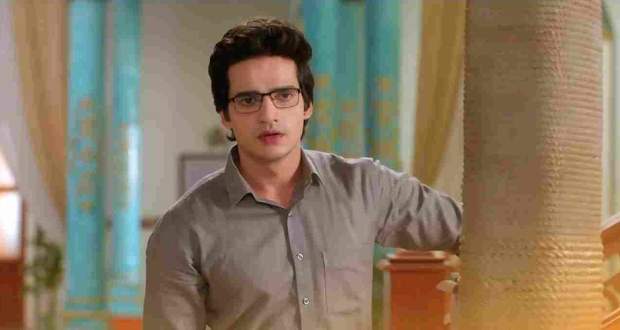 Mithai tries to help Apeksha by giving her some tips but gets ignored like a fly.

Aabha notices that lately, Apeksha has been trying to visit and get involved with the family members a little too much.

Siddharth also notices Apekasha's behavior and confronts her for trying to be something she is not.

Just then, Harimohan goes to the study to find Siddharth holding Apeksha by the arm, seeing that, Harimohan brings Siddharth to the side and reminds him of the rules and regulations of the Choubey house.

Siddharth apologizes and tells Harimohan that Indu should stay as long as she wants, hearing that Apeksha bursts out and interviews.

Very calmly, Harimohan explains to Apeksha that strangers should not intervene in family matters.

Later, Girish overhears Aabha and Geetikas's resumed discussion regarding Apeksha and tells Geetika that if Siddharth likes Apeksha then he has no problem himself.

On the dining table, Girish is upset that Mithai and Indu are still in the house.

Harimohan reminds Girish that Indu is Arti's friend and he will help her as much as he can.

Girish begins to storm off at the mention of Arti's name and Siddharth stops him.

Siddharth is hateful because of Girish's behavior and Keerti tells them to stop for once at least.

Here, Mithai is persuading Indu to eat more but Siddharth comes and Indu finishes her meal at once.

Mithai is impressed at Siddharth's influence on Indu.

Later, Siddharth is still thinking about what Indu said about Arti's promise to marry Mithai and Siddharth.

His thoughts are disturbed by some loud noise, Siddharth storms only to be hit in the face by a pillow thrown by Mithai. Siddharth shouts at everyone and Harimohan calms him down.

Bringing Siddharth away, Harimohan finally asks Siddharth if he will be able to follow his late mother's wish by marrying Mithai.