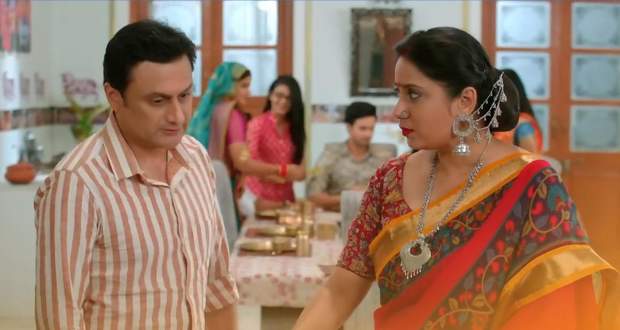 Without missing a breath, Siddharth refuses the offer and tells Harimohan that he does not believe in either love or marriage because of how his parents, Girish, and Arti's marriage turned out.

On the other hand, everyone is playing the game of dumb charades and when the pillow stops on Karishma, Rajiv tells her to intact "I Love You" which Rohan guesses.

Having heard the magic words, Karishma and Rohan's hearts flutter and turning red as an apple Karishma runs out of the room.

Mithai runs to the kitchen but stops abruptly. After seeing Siddharth, Mithai slips and falls.

Instead of helping her, Siddharth yells at Mithai for having no control over herself.

Mithai gets furious at Siddharth aka "Karela babu" and Mithai blames her loss of balance on him.

Later, Girish confronts Harimohan regarding all the disrespect he has to face since Mithai has entered their lives.

Harimohan explains to Girish that having Mithai around is like being immersed in happiness.

Continuing further, Harimohan tells Girish that Arti recognized Mithai's significance way before any of them, that's why she chose Mithai to be Siddharth's wife.

Hearing this Girish mentions to Harimohan that Arti has been long gone and making present decisions based on her wish is futile.

Later, Harimohan tells Chandrakanta everything and she inquires as to why Harimohan put the marriage proposal in front of Siddharth.

Chandrakanta also tells Harimohan to put himself in Girish's shoes and try to understand him sometimes.

Just then, Girish comes and tells Harimohan that Bhura visited their store that day and asked for 5 lakh rupees including the interest.

Girish warns Harimohan that he senses something fishy, just then, Mithai enters and tells Girish that he should not pay all that money for her.

Mithai says that she'll work very hard and manage everything.

The look in Harimohan's eyes tells Girish clearly that he has been misjudging Mithai since day one.

Mithai makes a promise to herself to never let anyone know how worried and stressed she is.