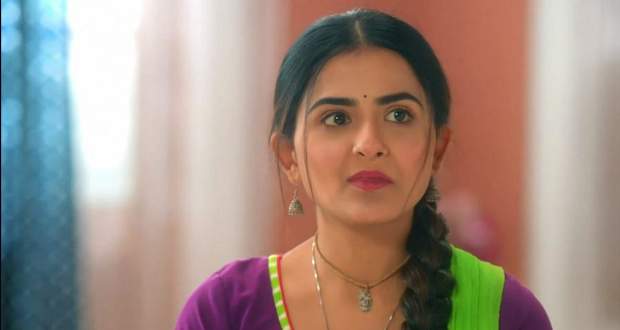 Today's Mithai 22nd April 2022 episode starts with Harimohan emersed in the thought of the day's events.

Harimohan tells Geetika that he feels hopeless and like everything is slipping from his hands.

Giving complete credit for his present success to Arti, Harimohan remembers how Arti helped him set up his business.

Harimohan tells Geetika that Arti wanted Mithai to be the Choubey family's daughter-in-law.

Thinking hard and fast Geekita finds the loophole in Arti's wish and proposes that Shubham can marry Mithai.

Harimohan is elated at the thought and Geetika volunteers to bring Shubham but instead sees Mithai standing frozen in the door frame.

Mithai asks Harimohan whether what she heard was true.

Harimohan is happy that Mithai only heard half of the conversation and is unaware of the plan they were developing.

Seeing Mithai limp, Harimohan asks about the cause and gets a long list of complaints from Mithai regarding Siddharth.

Unfortunately for Mithai, Siddharth enters at the very moment and hears everything.

Mithai turns around only to discover Siddharth standing right in front of her and bites her tongue.

Limping, Mithai sits down on the stairs due to the pain in her feet and sees Siddharth standing right in front of her.

Mithai hides her face out of fear as if Siddharth was going to eat her up.

Seeing Mithai in pain, Siddharth's heart mellows and although he calls her disgusting, he gives Keerti the pain relief spray for Mithai.

Here, Harimohan tells Shubham that he should get married and he has found him a great girl.

With every word said by Harimohan, Shubham's smile gets bigger and bigger.

Shubham tells Harimohan that he has no objection to marrying Mithai.

Screaming like a child, Mithai refuses to apply the spray that Keerti brought and is astonished that it didn't hurt a bit.

Keerti tells Mithai that she should thank Siddharth as he was the one who sent the spray.