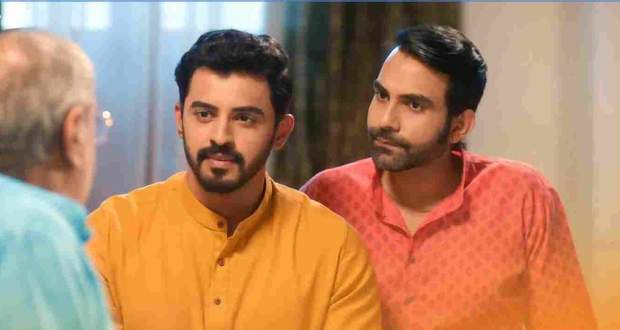 Today's Mithai 23rd April 2022 episode starts with Harimohan being excited like a child who just found a candy as he tells Chandrakanta of Geetika's amazing idea.

Chandrakanta is wary of the urgency shown by Harimohan and aware of Girish's reaction.

On the other hand, Mithai meekly knocks on Siddharth's door but gets no answer, unaware that no one is allowed into Siddharth's room, Mithai puts the spray down only to find a picture of baby Siddharth and Arti.

Siddharth's scream startles Mithai causing the frame to nearly fall. Mithai is chased out of the room.

Keerti explains to Mithai that Siddharth has drowned himself in his pain to such an extent that he is oblivious to other people.

Locked up in his room, Siddharth thinks of Girish's negligence to Arti's words and Harimohan's offer for Siddharth to marry Mithai.

Going into Indu's room, Harimohan tells Indu that he has chosen Shubham to be Mithai's husband.

Indu's eyes sparkle at the thought of fulfilling Arti's wish.

Mithai storms into the room complaining about Siddharth's behavior.

Mithai decides that this will be the last time Siddharth is allowed to speak to her that way.

Harimohan agrees that no one can talk rudely to the elder daughter-in-law of the Choubey family.

As the reality dawns on her, Mithai whispers about how she can get married before setting up her father's business.

All her dreams seem distant somehow as Indu tries to explain the perks of the marriage to Mithai.

The suffering in Shubham's heart is shown on his face as he isn't ready to get married yet but couldn't refuse Harimohan.

Girish jumps out of his seat and tells Harimohan that he will never let that happen.

Girish throws around accusations on Mithai and Indu regarding their false intentions to which Harimohan gives Girish a piece of his mind.

Siddharth and Keerti notice Mithai who has heard every word.