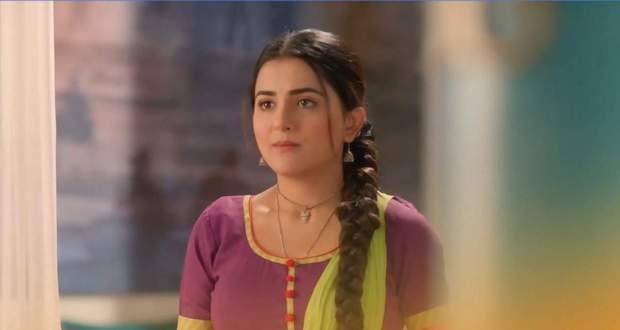 Today's Mithai 25th April 2022 episode starts with Keerti spotting Mithai who pretends like she heard nothing and escorts Harimohan out of the living room.

Siddharth hopes that Mithai doesn't refuse to get married due to Girish's bitter words.

Mithai tells Harimohan that she can't get married because her primary goal is to release and set up her father's sweet shop.

Harimohan tries to reason with Mithai, mentioning that she can begin her store after getting married and she can even run Harimohan sweets if she likes.

Mithai explains to Harimohan that her dreams are different and need special attention.

Chandrakanta comes to Mithai's rescue and tells her to rest and think wisely and assures Mithai that they will accept whatever decision she makes.

Taking their leave, Mithai meets Siddharth in the hallway.

Siddharth reminds Mithai of Bhura and his obsession with getting married to her.

Thanking him for reminding her, Mithai assures Siddharth that she will handle everything.

The next morning, Mithai is worried about finding accommodation, and overhearing her, Pramod assures her that he will help.

Trying to avoid going shopping with everyone, Mithai jumps out the window and runs away.

Siddharth spots Mithai but doesn't care enough to stop her.

Mithai finds the broker and goes in search of a good house for her and Indu to live in.

Bhura's minion spots Mithai and informs Bhura who decides to visit Mathura at that very instant.

Here, Chandrakanta questions why Harimohan has been so instant even after Mithai's denial.

Harimohan tells Chandrakanta that Mithai is like a breath of fresh air that will light up their whole house.

Chandrakanta isn't fully convinced and pleads with Lord Gopal to help them find a way.