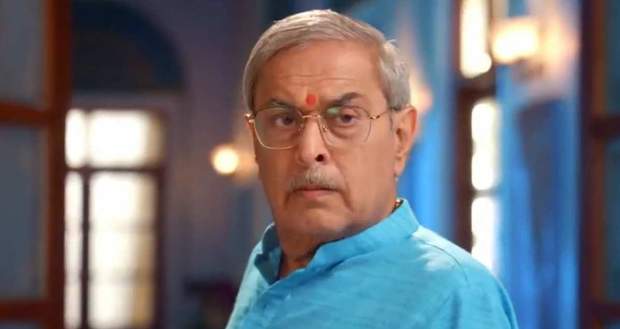 Today's Mithai 26th April 2022 episode starts with Mithai being worried about Harimohan's reaction to her news of leaving the Choubey house.

Keerti and Chandrakanta bring Girish some medication for his stomach pain and tell him to stress less and take care of his health.

In the living room, Apeksha comes to visit Siddharth as he has been working from home and they haven't met for a while.

Siddharth begins to take Apeksha outside and tells her that Harimohan fixed Shubham and Mithai's wedding.

Apeksha is stunned at this revelation and begins to lecture Siddharth as to how he has been extremely tolerant and dismissive of Harimohan's recent decisions.

Tired of having this conversation, Siddharth tells Apeksha to drop the subject and let things roll their way.

Just as they are about to leave, Mithai enters the house at full speed and nearly crashes into Siddharth.

Siddharth begins to lecture Mithai but is cut off as Mithai has more important business to take care of.

Mithai enters Harimohan's room and tells him that she needs to leave the Choubey house as she has been a guest for too long.

Siddharth overhears every word that Mithai says as she convinces Harimohan to let her go.

While Mithai is collecting her stuff, she accidentally drops Indu's medical reports.

Before Mithai could spot the reports, Siddharth sneakily picks them up and hides them.

Mithai and Indu take their leave.

Harimohan asks Siddharth to follow Mithai and figure out their new address.

Tired of Apeksha's constant bickering Siddharth tells her that Indu has lung cancer.

Mithai brings Indu to their new house, only to find Bhura sitting inside.

After an argument with Bhura, Mithai begins to leave but her path is blocked by him.

Bhura feels a hand throw him into the air and he lands straight on his back, Siddharth stands between Mithai and him.