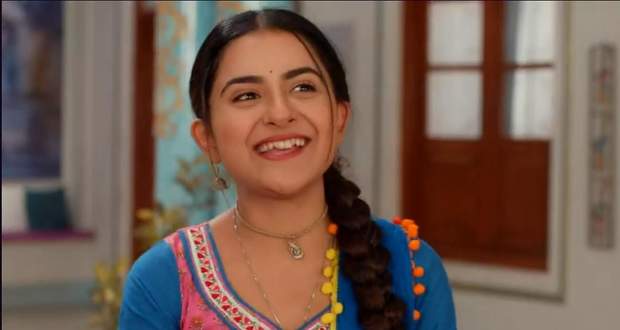 Mithai hands the medicine to Indu and tells her to chuck it like prasad.

Deciding to confront Siddharth, Mithai nearly crashes into him.

Tired of Mithai's bickering, Siddharth shushes her and hands her a first-aid box.

Here, Pramod meets up with Agrawal and plots a devious plan to hand Harimohan sweets to him.

On the other hand, Chandrakanta is aware that Harimohan will be creating a fuss over Mithai's arrival.

Defending his desire, Harimohan tells Chandrakanta that it was Lord Krishna who brought Mithai back into the Choubey house.

Just then, Mithai enters the room and expresses her concern over starting her store and returning all the money back to Bhura.

Harimohan sits with Mithai and completes all the math for her.

Remembering Arti's contribution to his business Harimohan gets emotional and tells Mithai to wisely find a way out.

In the kitchen, Aabha enters, and Pramod hammers on the nail hard by playing on Aabha's insecurity and jealousy of Arti.

Pramod is happy to find the exact chess piece that he needed to fraud Harimohan sweets.

Mithai prays to Lord Krishna to find her a way out, Indu hears Mithai and tells her to get married.

Astonished at Indu's stubbornness, Mithai tells her to not bring up the topic till she releases their store.

Mithai remembers that she forgot Munni in the rented house itself and Harimohan tells her to take their car.

Pramod finds his perfect chance, and asks Mithai to help him get something.

Also, Pramod plans the timely arrival of Girish and Agrawal in the same spot so that Girish sees Mithai with Agrawal.

Girish snaps a picture of Mithai talking with Agrawal to show the whole family.

In the house, Indu meets Harimohan and tells her to hide the reports from Mithai.

Mithai gets home and decides to confront Harimohan before selling her jewelry but is disappointed by the amount Harimohan mentions.