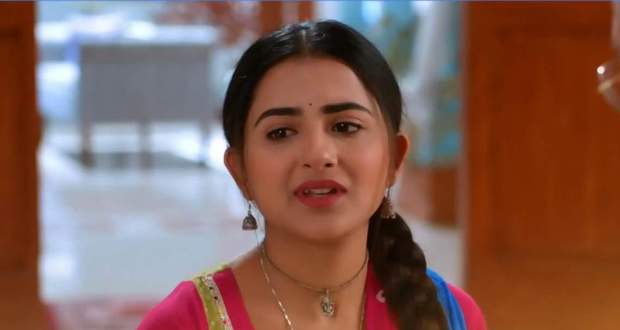 Harimohan advises Mithai to sell her Aloo jalebi in Harimohan sweets itself.

Mithai worries about using Harimohan's supplies and selling the aloo jalebi to Harimohan himself.

Making a valid point about being a businessman, Harimohan tells Mithai that he will deduct the material cost and provide the remaining profit to Mithai.

Hearing this fabulous idea, Mithai runs to the kitchen and begins to prepare aloo jalebi.

Harimohan ignores Chandrakanta's advice and all the family members gather in the living area.

Just then, Girish storms into the Choubey house and reveals to everyone that Mithai is the traitor he always thought she would be.

Girish reveals the picture he snapped earlier to everyone.

Siddharth tells Girish that it isn't his business what Mithai does but asks Girish to keep Indu out of the matter.

Just then, Agrawal and his son enter the Choubey house and Mithai serves them her aloo jalebi.

Girish is skeptical of Agrawal's visit but knows better than to say anything.

Agrawal offers Mithai the 3 lakh rupees that she has been running around to collect and asks her to come work for him in their sweets shop.

Mithai is grateful for the offer proposed by Agrawal but decides to reject it.

Harimohan's faith is restored in Mithai by seeing her grand gesture.

Here, Pramod is disappointed as the show he thought would be a blockbuster remained a flop.

Mithai announces that she has only two partners, Lord Krishna and Harimohan.

Later, Siddharth asks Harimohan to get rid of Mithai while he takes Indu for additional medical tests.

Harimohan plots to bring Mithai and Shubham together but Chandrakanta warns him to be aware as history is repeating itself.

Harimohan calls the elders of the family and tells them that he wants Mithai to sell Aloo Jalebi in all the Harimohan sweets stores.