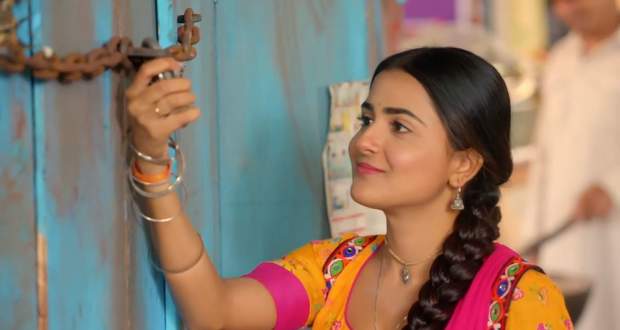 Today's Mithai 4th April 2022 episode starts with a cheerful girl, Mithai Gosai running through the crowd to return to her sweets store.

At the store, Mithai's father wishes luck to Mithai winning a competition held in the village.

With a fall on the floor, Mithai wakes up from her dream.

Seeing that she is late, Mithai starts by preparing for the best sweets competition.

Later, while praying to God, Mithai mentions that she'll win the contest and she'll build her business with the acquired money.

On the other hand, Harimohan Choubey a sweets vendor is also seen preparing for the same competition.

Meanwhile, Mithai leaves for work after taking the blessings of her mother and Lord Krishna.

Mithai halts at her late father's store which is sealed with a lock as it is in debt.

Holding the lock, Mithai promises to buy the store back.

Later, a guy is seen leering at Mithai at the railway station.

However, Mithai makes him pray for her to win the competition.

Later, the guy threatens Mithai's mother to kidnap Mithai if she does not marry her.

He reveals that the store of Mithai's father is mortgaged with his father.

In the meantime, Siddharth Choubey is introduced as a software engineer with whom his father, Girish is upset for not being a part of the family business.

Further, Siddharth's grandfather, Harimohan requests Siddharth to accompany them to the competition.

Meanwhile, Mithai strolls through the streets selling her sweets 'Aloo Jalebi' in a unique style by singing its recipe in tune.

Meanwhile, Harimohan is not much impressed by the fusion sweets they'll be taking for the competition.

However, Girish brags about growing the business to an entire empire.

At the same time, Harimohan overhears Mithai's song and asks her to come into the house with her sweets.

Entering the lavish house of the Choubeys, Mithai watches everyone with a stunned expression.