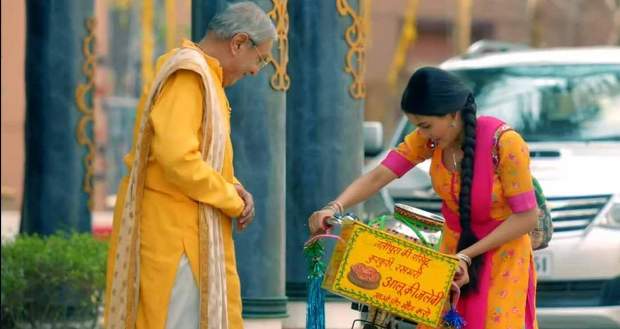 Harimohan assures her that she is standing in the house of the biggest sweet vendor in Mathura.

Chandrakanta is alarmed due to Harimohan's acts and asks for an explanation.

He brushes the question off by saying that he is helping Mithai fulfil her dream.

Mithai is astonished at the sheer size of the Choubey family's kitchen.

As Harimohan helps Mithai collect and prepare ingredients they bond deeper over their love for sweets and similar interests.

Looking at Harimohan, Mithai is reminded of her late father.

At the venue, Mr Agrawal boasts about his son, Aditya's involvement in business and warns Girish to be on the lookout as this may not be his year to win.

Girish expresses disappointment as neither of his children wants to join the family business.

Shubham is hurt since Girish does not consider him as his son.

Here at home, Mithai is busy preparing sweets and chatting with Harimohan.

Chandrakanta is delighted to see Harimohan happy but fear of family turning on one another grips her heart.

Harimohan assures Mithai that he will take care of any problem that she might face due to the loss of her registration number.

Chandrakanta refuses to accompany them due to her knee pain.

After reaching the venue, Mithai is refused entry.

Dadu provides the registration amount of 10,000 rupees on behalf of Mithai.

He declares in an iron-clad voice, that if Mithai is denied entry in the competition, then Hari Mohan sweets will withdraw too.

Everyone is shocked and Girish accuses Harimohan of not caring for him.

Harimohan questions whether Girish is scared to compete with Mithai.

Mithai praises Lord Gopal and is awestruck at the beauty of the venue.

But her happiness seems to be short-lived as Bhura grabs her by her hand.