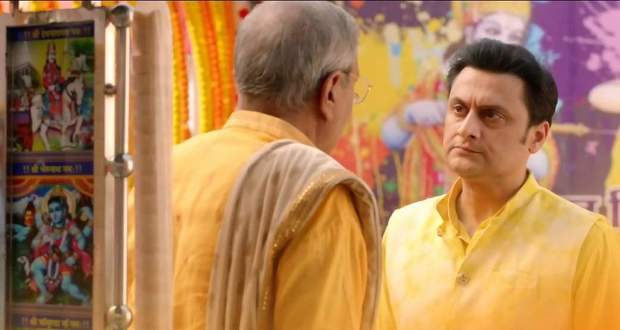 Today's Mithai 7th April 2022 episode starts with Bhura grabbing Mithai by her hand and dragging her to the car.

Bhura runs away at the sight of some security guards.

Siddharth scolds Mithai and warns her to keep her acts in check. He doesn't want anything to hamper Harimohan's reputation.

Mithai is scared due to previous events but still manages to thank him.

On the stage, contestants take turns presenting their sweets to the judges.

Mithai is awestruck but manages herself in time. Mithai derives strength from Lord Krishna and sings her famous song to introduce her "aloo jalebi".

The extraordinary introduction intrigues everyone.

Mithai runs to Harimohan and expresses her gratitude to him.

All the judges agree and announce Mithai as the winner of the competition.

Everyone is shocked and disappointed at the result except Harimohan.

All the emotions come flooding into Mithai's eyes, falling into tears.

Girish is frustrated and Mr Agrawal fans his fire.

Bhura sneaks into the competition venue and challenges to make Mithai his wife.

After reaching Choubey house, Mithai proceeds to Lord Krishna's statue and thanks him for keeping her back.

Bhura plans to kidnap Mithai and force her to marry him.

Mithai leaves for home and is followed by Bhura's men.