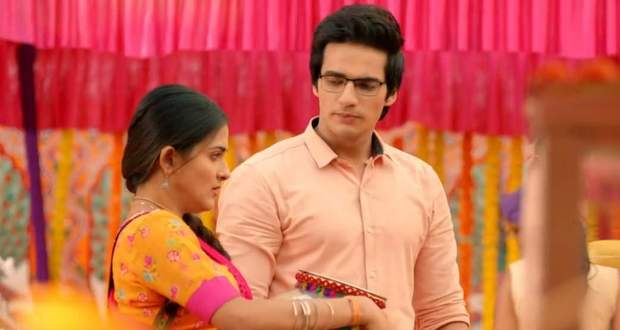 Girish is frustrated because he lost and blames Shubham for it.

Siddharth advises Harimohan to shut his business down because of all the quarrels and heartaches caused by it.

On the other hand, Bhura kidnaps Mithai and forces her to marry him.

Mithai prays to Lord Gopal to find her a way out of Bhura's crazy games.

Bhura tries to convince Mithai by agreeing to let her run her business under the condition that she should marry him.

Mithai knows that it won't be easy to get out of Bhura's trap and uses a clever idea.

Mithai agrees to marry him and buys herself some time to think her plan through.

Although a little astonished at Mithai's sudden change of heart, Bhura is happy and excited to hear that.

Mithai pretends to enjoy the atmosphere but keeps thinking of a way out.

Everyone is excited and enjoying the ambience.

Panditji informs Bhura that the wedding must not happen or the results will be life-threatening for Bhura.

Panditji proposes that Bhura must marry a goat before he marries Mithai.

In the Choubey house, Shubham confirms Girish and demands an explanation for the injustice he faces compared to Siddharth and Kirti.

Girish cold-heartedly disregards Shubham's involvement in the family and refuses to accept Shubham as his son.

Mithai strategically plans her escape and rides a bicycle out of the mandap.

In the Choubey house, Shubham blames himself for the loss in the competition.

Internal conflicts are weakening the family from within.

On the other side, Mithai reaches home and informs her mother of all the things she has been to.

Scared and frantic, Indu decides to leave town forever. Indu and Mithai flee in the quiet of the night itself.