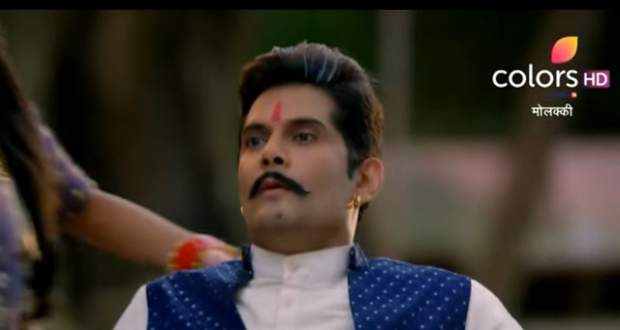 Today's Molkki 10 August 2021 episode starts with Sudha making Veer's favourite food while Purvi offers to take it to Veer and adds sleeping pills into it.

Later, Virendra is going somewhere while Purvi sweet talks Aarav into going after him and bringing him back home saying that Virendra's attacks might go after him.

Aarav calls Charansingh and informs him of Virendra's location while telling him to come there with his goons.

Meanwhile, Purvi talks to Sudha and hides Veer after which she lies to the family that he has run away to the old factory.

They all rush to the old factory and get shocked seeing CCTV cameras and monitor there while flashback shows Purvi giving the security money to get the camera's fixed.

They get shocked seeing Charansingh and his goons there while Aarav comes there and hugs his father.

They talk about their plan while Virendra and Nandini realise the truth that Purvi was trying to show them.

In the evening, Aarav comes to the haveli and bids Nandini a happy birthday seeing the house decorated with a cake in the centre.

Purvi says that she has a surprise and shows the recording of Aarav and Charansingh at the old factory.

Virendra beats Aarav and Veer outs him from the house while Nandini runs to her room.

Virendra and Purvi try to console her while Nandini rebukes Purvi saying that everything is her fault. Lastly,

Nandini leaves saying that she is booking a ticket to London as she can't stay there anymore.

© Copyright tellybest.com, 2020, 2021. All Rights Reserved. Unauthorized use and/or duplication of any material from tellybest.com without written permission is strictly prohibited.
Cached Saved on: Friday 15th of October 2021 12:27:19 AMCached Disp on: Thursday 21st of October 2021 08:18:06 PM