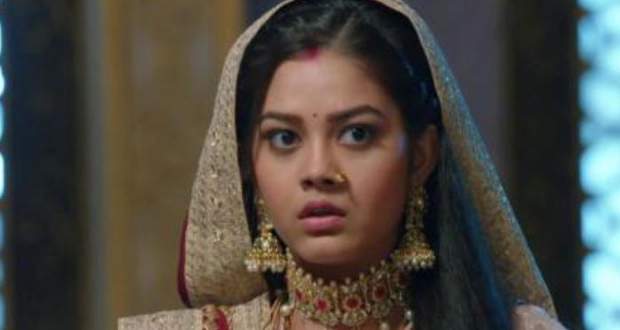 Today's Molkki 10 February 2021 episode starts with Purvi telling the kids to go to sleep and accidentally putting her hand over Virendra's hand and looking at him.

Vaibhav calls Priyashi and she tells him that she has kept an outfit for him while he sees her outfit and gets angry.

Virendra's guards tell him that the Chaggan was one of the goons who attacked him.

Elsewhere, Vaibhav is wearing Priyashi's outfit while some men start harassing him but another man comes there and saves him.

Meanwhile, Purvi confronts Bhuri that she knows her father is dead and asks her whom the medicines are for.

However, Bhuri threatens her to mind her own business or she will regret it.

She goes while Purvi thinks that she is surely hiding something.

Meanwhile, Virendra reaches Chaggan's place and manages to catch him.

Virendra slaps him and he reveals that it was Vaibhav who was behind the attack and is taken away by the guards while Virendra thinks the Purvi was right.

Later, Purvi is teaching the kids while she sees the admission information about Rewari collage.

She tells Virendra about it while Prakashi and Bheem disagree with her when Virendra convinces them and tells Purvi to fill out the admission form.

They collide while Virendra steps aside and tells her to go first while she looks back at him as she goes and smiles.

Just then, Priyashi enters tells Virendra that Vaibhav again tried to molest her and also hit her while showing him the marks on her body.

Vaibhav enters and pleads with Virendra to believe that he didn't do it while Virendra slaps him and tells him that he knows that he is the one behind the attack on him.

Virendra tells Priyashi to rub ash all over Vaibhav's face in front of the whole village and makes him sit on a donkey.

© Copyright tellybest.com, 2020, 2021. All Rights Reserved. Unauthorized use and/or duplication of any material from tellybest.com without written permission is strictly prohibited.
Cached Saved on: Thursday 29th of July 2021 02:27:11 AM