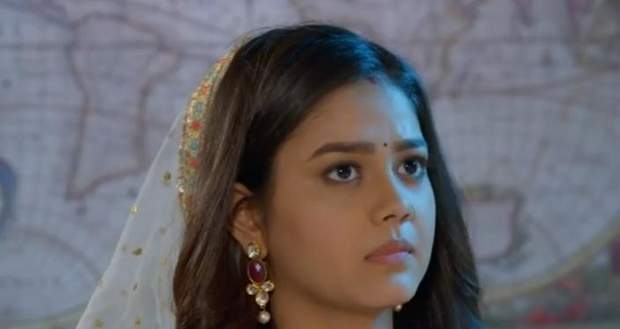 Today's Molkki 10 March 2021 episode starts with Purvi telling Karan to have a seat while she brings water for him when he purposefully drops the glass of water over himself.

Purvi apologises to him and wipes his shirt with a towel thinking that she dropped it on him.

Meanwhile, someone records them after which Karan leaves while Purvi bids him bye.

Elsewhere, Anjali and Bhuri are collecting all the knives in a bag while Bhuri gets tensed fearing that Purvi might catch them.

They turn to see Purvi while Bhuri accidentally drops the bag to reveal the knives.

Purvi questions them while Anjali makes an excuse that she is giving the knives to Bhuri to get them sharpened at the market.

Virendra teaches the kids how to control the drone while Purvi goes there with juice for everyone.

Purvi sees a woman held captive in the abandoned palace through the screen and rushes towards the building.

Purvi says that she has the recording of the woman captive in the drone and will expose her to Virendra.

Later, Virendra does not believe Purvi's words about the woman captive in the abandoned building while Prakashi tells him to check once to calm Purvi's mind.

Prakashi, Purvi and Virendra reach the old building but do not find anyone thereafter which Prakashi says that Purvi has gotten the illness of hallucinations.

However, Virendra gets shocked seeing something on his laptop and tells everyone to get out of the room except Purvi.

He shows her the video of Purvi wiping the water from Karan's shirt but it looks like she is intimately hugging him.

She tells Virendra that it is not true and checks if the recording of the woman is there while Virendra thinks if she is dumb.

She thinks that it is Anjali's doing and drags her to the room while confronting her.

Anjali denies while Virendra says that Purvi's accusations are not proved until now.