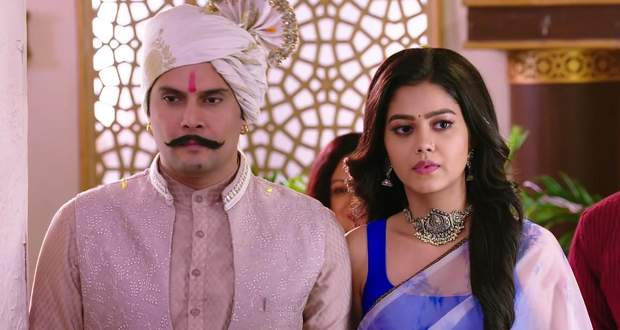 starts with Purvi getting flashes of her past and falling unconscious while Bhuri leaves her unattended.
Suddenly, Juhi and Manas come there and see Purvi on the ground and inform Virendra about this. Virendra tells Veer to call the doctor. The doctor attends Purvi and tells them that she'll be fine soon. Virendra warns Prakashi, Anjali, and Bhuri to stay alert and not tell any past things to come in front of Purvi.

Later, Dhwani questions Virender who made her painting. Virendra tells that he made it as a gift for her wedding.

The next day, Virendra takes everyone to show his village Rewari. Nani stays back as she wants to rest.

Virendra decides to repeat all the memories he had with Purvi to make her remember her past without stressing her brain. They visit various places, play and eat.

Further, Purvi goes to drink water where Virendra helps her to use the handpump. They both start playing with water like in the old days.

On the other hand, at home, Nani tells Prakashi that she knows they do not like Purvi and want to get rid of her. She also tells them that she knows Purvi was Virendra's wife but now she wants her to be Daksh's wife. So, she asks whether they want to support her in separating Virendra and Purvi.

© Copyright tellybest.com, 2020, 2021. All Rights Reserved. Unauthorized use and/or duplication of any material from tellybest.com without written permission is strictly prohibited.
Cached Saved on: Monday 17th of January 2022 08:49:27 AM