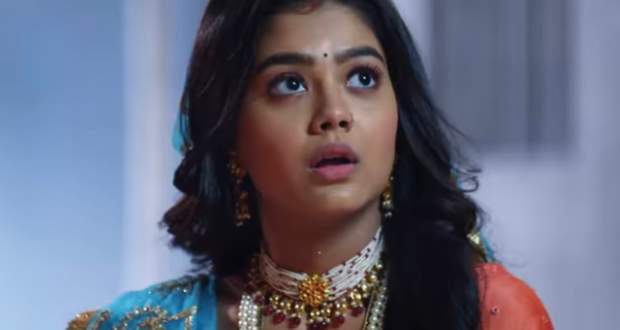 Today's Molkki 11 August 2021 episode starts with Veer telling Sudha that he will never accept her and will always be with Priyashi while looking at Purvi who is standing by the door.

Later, Anjali announces that Aarav has came outside and tells Prakashi that there is going to be drama.

Nandini rebukes Aarav for creating drama by coming there dressed as a groom but he mocks her and tells her that he has gotten a Molkki.

The bride comes into view and unveils her to reveal Priyashi which shocks everyone.

Nandini slaps Aarav and insults Priyashi who talks back and says that everything is Purvi's fault.

Veer breaks down while Purvi slaps Priyashi and they leave.

At night, Virendra feels miserable and tells Purvi that he regrets making her his Molkki and ever falling in love with her.

He says that he would live alone if God gives him another chance and says that she broke his family and ruined his life.

Purvi sees Veer and Nandini in a miserable state and thinks that all of it is her fault.

She packs her bags and leaves the haveli as a heavy rainfall is going on.

At the bus station, a lady steals her bags and runs while Purvi runs after her.

The lady wears Purvi's clothes and gets into a bus while later falls off a cliff due to the slippery road.

Meanwhile, Purvi is walking on road when a car hits her and she falls unconscious.

© Copyright tellybest.com, 2020, 2021. All Rights Reserved. Unauthorized use and/or duplication of any material from tellybest.com without written permission is strictly prohibited.
Cached Saved on: Thursday 27th of January 2022 02:50:42 PM