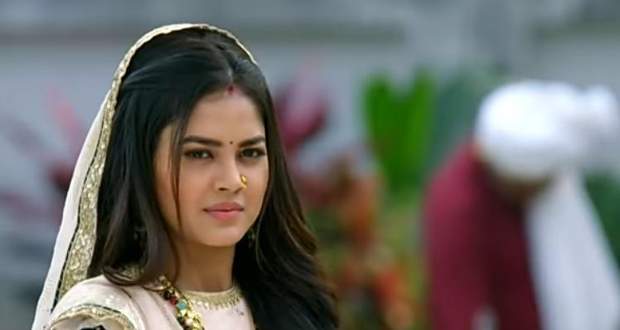 She finds her crying out in pain while holding her foot.

She says that she has gotten blisters on her foot due to the new shoes.

Purvi gives Priyashi her sandals and tells her to come downstairs while Priyashi apologises to her.

Elsewhere, Vaibhav flirts with Jyoti and convinces her to get Priyashi in his room somehow.

Jyoti request Proyashi to come with her to help her fix the dress and she agrees.

She takes her to Vaibhav's room and locks the door.

She makes an excuse of going to the bathroom and tells Vaibhav who is sitting there that her prey is in the room.

Vaibhav convinces her to exit through the window.

Priyashi gets frightened seeing Vaibhav there while Jyoti goes to Anjali and tells her that she has finally trapped Vaibhav in her love trap.

Elsewhere, Purvi is about to put the ball in the hoop when Virendra lifts her to distract her and they share a romantic moment.

Suddenly, Virendra takes the ball and puts it into the hoop making his team the winner.

Priyashi is about to leave the room while Vaibhav gets on his knees and proposes her to marry him with a ring.

She accepts and Vaibhav gives her a spiked juice.

Elsewhere, Purvi realises that Priyashi and Vaibhav are missing and go to look for her.

Vaibhav messages his friends to come to his room to see the show.

His friends go while Anjali and Jyoti overhear them.

Vaibhav gets close to Priyashi but she pushes him away and is about to leave when he forcefully throws her on the bed.

She shouts while Purvi hears her.