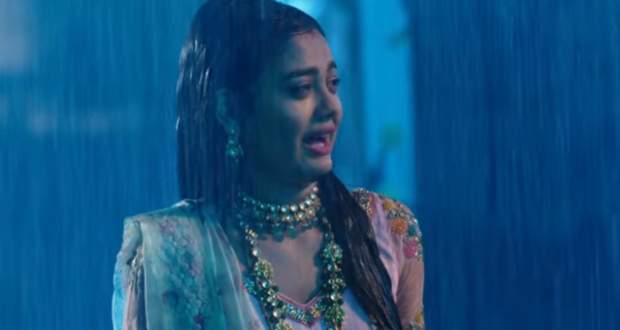 Purvi getting hit by a car and falling unconscious.

Six months later, Virendra is wrestling on the ground and wins the competition while Veer gets worried for him.

Virendra recalls rebuking Purvi and later a servant informing him that Purvi has died in a bus accident.

Virendra puts pressure on the opponent's neck while Veer comes to them and separates them while advising Virendra to move on from Purvi's death.

Veer tells him to focus as they are up against Daksh Singh Shekhawat this time while a bike race is going on elsewhere.

The winner is later introduced as Daksh as some people are having a strike against his factory and his manager informs him.

Elsewhere, Manas and Juhi destroy the house while Virendra comes there but doesn't react.

Daksh tells his manager to lie to the workers who are on strike and they all start beating their union leader.

It starts raining as Daksh rebukes the union leader and leaves.

Veer tries to console the kids as he recalls police coming to their house and informing them that Purvi is dead as they found her identity card on the dead body.

Later, Daksh's friend Nishant wishes him a happy birthday and asks him when he is going to make a move on his dreamgirl.

Nishant tells him to remember how much he did for her after her accident, how he took care of her, tried to find her family even after her memory loss.