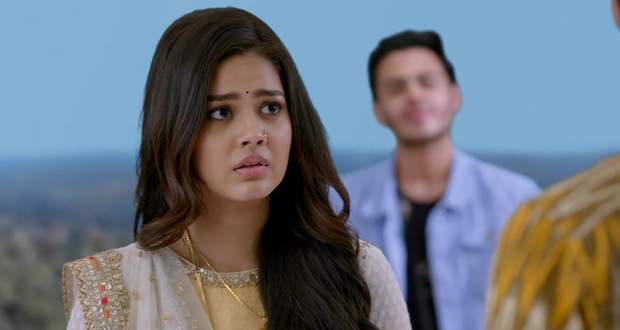 Today's Molkki 12 February 2021 episode starts with Purvi holding the boy's hand and stopping him while getting shocked to see that the girl is Sudha.

Sudha tells her that the NGO got her admission into this college and that the boy is Karan, a senior of her's.

Purvi goes to the boys and tells them that they can't do someone's ragging while Karan tells her that he will do her ragging instead of Sudha's and tells them to come to the terrace in the lunch break.

Virendra thinks that he will drink a cold drink outside the college while Sudha suggests revealing the truth that Purvi is the village chief's wife while Purvi refuses.

Karan asks Purvi her name and she reveals her name after which he tells her to do the catwalk on the wall of the terrace if she doesn't want him to rag Sudha.

Meanwhile, some villagers meet Virendra and he suggests them to also send their wives and daughters for education.

Purvi walks on the wall of the terrace while the villagers notice her and tell Virendra who gets worried about her.

Virendra is about to go near the college but stops seeing the line drawn by Purvi.

Karan tells Purvi to apologise to him when she suddenly slips and falls from the terrace but Virendra catches her.

Elsewhere, Priyashi gets shocked seeing Vaibhav missing from the cell while suddenly Vaibhav comes from behind and ties her hands.

A flashback shows Vaibhav making a deal with Bhuri to free him in exchange for money.

Vaibhav tells Priyashi to get ready to die and takes her away in the car.

Purvi thanks Virendra while he berates her when Sudha reveals to him that Karan did it.

Virendra rebukes him and drags him towards the principal's office who rusticates him but Purvi stops them and requests Virendra to give Karan the last chance.