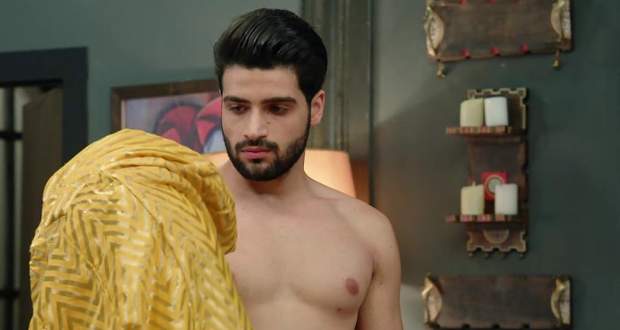 She struggles against him while he removes his shirt and tries to get physical with her.

Elsewhere, Purvi looks for her while Vaibhav forcefully rapes Priyashi as his friends watch him from the window.

Purvi sees them and asks him why there are gathered around the window.

They make an excuse and make her leave while Anjali and Jyoti roam the farmhouse in search of Vaibhav and Priyashi.

Vaibhav's friends say that he is doing wrong and think that they shouldn't have made a bet with him.

Elsewhere, Manas hits a pole and gets injured and Virendra tries to take him to the hospital.

Manas refuses and tells him to call Purvi after which he sends a servant to bring her.

Anjali and Jyoti hear Priyashi crying for help but they leave from there without doing anything.

Anjali forms a plan to tells Jyoti to do as she says.

She goes to the Virendra and tells them that Purvi refuses to come while someone records Vaibhav in bed with Priyashi.

Jyoti tells Purvi that Manas is calling for her while she thinks that he wants her to play with him and declines.

Anjali calls Jyoti and tells her to put the phone on speaker while Purvi says that she doesn't have for Manas as she needs to find Priyashi.

Virendra says that they don't need her and take Manas to hospital.

Meanwhile, Purvi notice the only locked door in the house and knocks on it.

Vaibav gets dressed and exits through the window while Purvi breaks the door's glass and enters the room.

She turns on the light and gets shattered seeing Priyashi.

She locks the door and tries to pacify Priyashi.

Elsewhere, Virendra reaches the hospital and doctors take Manas to the emergency room while Vaibhav thinks that Purvi didn't do right by abandoning Manas.

Priyashi tells Purvi that Vaibhav raped her while she assures her that Virendra will give her justice.