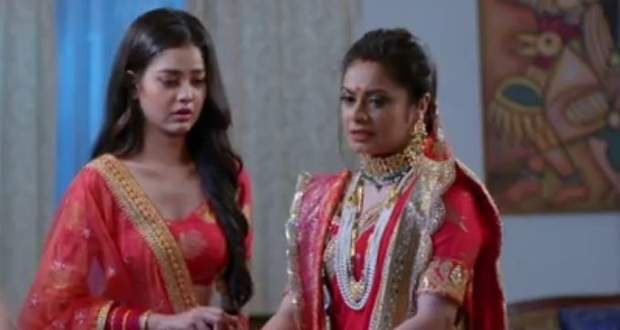 Today's Molkki 12 May 2021 episode starts with Sakshi taking the Sargi and leaving while Purvi tells Virendra to go after her.

Anjali purposefully makes Purvi dress up Sakshi for Karvachauth to make her sad.

Purvi dresses up Sakshi while Anjali comes there and praises her.

Sakshi says that Virendra will only look at her and Purvi leaves sadly.

Later, the kids make an excuse and tell Purvi to go to their room.

However, she gets surprised to see Virendra there who gifts her Karvachauth attire and tells her to get ready.

She refuses and he dresses her up while she smiles at him.

Purvi gets upset thinking about Sakshi but Virendra assures her that he will make her first Karvachauth special.

Sakshi tells Virendra to come with her to the garden outside while Purvi waits for him on the terrace.

Purvi sees Virendra and Sakshi in the garden as gets upset while Virendra looks at her.

Purvi hides as Sakshi look in her direction.

The ladies notice the moon and Virendra messages Purvi to get ready.

Virendra makes an excuse to Sakshi and video calls Purvi to break her fast.

Upcoming Molkki episode update: Sakshi to find out about Purvi and Virendra.