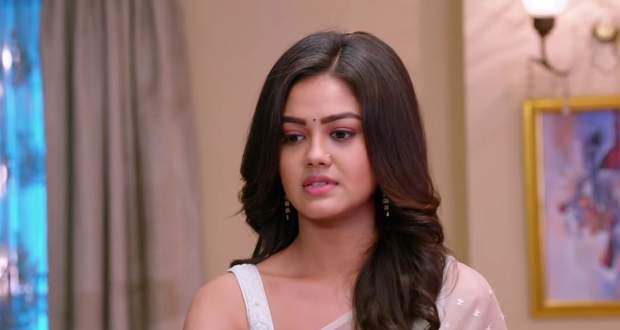 Today's Molkki 12 October 2021 episode starts with Virendra apologizing to Purvi after which she feeds him as they share an emotional hug.

Later, at haveli, Purvi sees Arjun in the kitchen and he reveals that he is thinking of making coffee after which she tells him that she will make it for him as he is their guest.

He helps her get the sugar jar and they share an eye lock while Prakashi clicks their picture.

The next morning, Purvi returns the money to Sakshi saying that Arjun refused to take it and wants something else which makes Sakshi wonder.

Meanwhile, Prakashi goes to the police station and tried to instigate Purvi by showing him the picture but he scolds her and tells her to leave.

Sakshi tells Purvi that she finds Arjun fishy and they plan to find out what is wants by the end of the day as Purvi reminds them that the hearing is in the evening.

Arjun comes to Virendra who tells him that he wants to give the custody of the kids to Purvi if anything happens to him while Arjun tells him to think it through and focus on the current case.

At the hearing, the prosecution lawyer brings in a forensic expert who says that the bullet killing Daksh is fired from the bullet that Virendra had.

However, Virendra says that he is lying as he had a different gun which was his bodyguards, and demands to call in the bodyguard.

However, the bodyguard also lied after which Arjun manages to get 2 days to gather evidence.

Afterward, Virendra tells Arjun to get the custody papers ready after which Arjun tells Purvi that they have to find the bodyguard and she suggests going to his house.