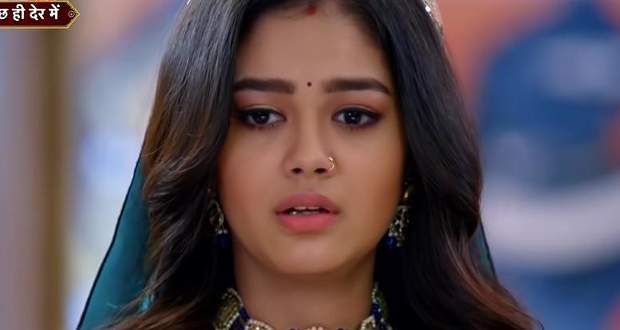 Today's Molkki 13 April 2021 episode starts with Virendra and Purvi enjoying themselves while she sees Sakshi in a mirror and goes by making an excuse to Virendra.

Anjali tells Jyoti do distract the handler of Ferris Wheel and she uses the lever to make the Ferris Wheel to stop suddenly which cause Manas to flung out of the car and hang from the cart.

Purvi finds out that Sakshi was living in a hit nearby and goes there to find nobody.

Juhi requests Manas go hold onto the cart while people notice him and rush towards the Ferris Wheel.

Purvi meets Sudha on her way out who informs her that they have Sakshi and show her walking towards them with Priyashi.

Purvi, Sudha and Priyashi plan to take Sakshi to her Haveli the next day as it is safe.

Purvi notices the commotion and goes there while Manas' hand slips and he is falling.

However, Virendra manages to catch him and everyone claps.

Later, Virendra is requested to start the wrestling championship and he agrees while Purvi and the kids doubt his strength.

Anjali cuts the breaks of Virendra's car amd leaves with Jyoti while he wins the championship and gives the trophy to Purvi.

© Copyright tellybest.com, 2020, 2021. All Rights Reserved. Unauthorized use and/or duplication of any material from tellybest.com without written permission is strictly prohibited.
Cached Saved on: Thursday 29th of April 2021 03:24:52 AMCached Disp on: Thursday 6th of May 2021 06:32:39 AM