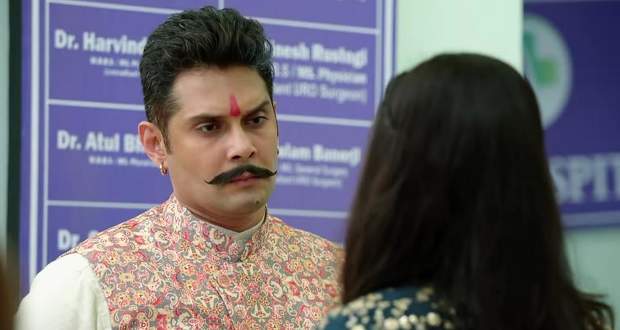 Today's Molkki 13 January 2021 episode starts with Purvi tending to Priyashi and leaving to get her water.

Priyashi removes the ring Vaibhav gave her and cries while Purvi thinks that the Virendra will have to believe her and punish Vaibhav.

A servant comes there and informs Purvi that the family is at the hospital as Manas got an injury and is in the ICU.

Purvi leaves to go to the hospital and notices Vaibhav and his friends in the hall.

Vaibav asks her why she isn't at the hospital when she suddenly slaps him and he gets angry.

Vaibav tells her that her sister did the same mistake by slapping him in front of his friends and says that she will also get punished.

She tells him that she will get him punished by Virendra while he mocks her saying that Virendra will not believe her as he knows Priyashi's wrongdoings and intentions.

Elsewhere, the doctor tells Virendra that Manas will need to be kept under observation.

Purvi comes there and Virendra tells her that she has lost the right to meet the kids.

He shows her an unconscious Manas calling for Haathi and says that he broke the child's trust.

Purvi begs him to hear her out in private and he drags her towards an empty room and tells her to speak.

At the same time, a nurse comes there and tells Virendra that he urgently needs to go to the reception.

He goes while a ward boy comes there and give Purvi an envelope and goes.

She gets shocked seeing the contents inside the envelope while Virendra comes there and tells her to speak.

She says that she can't tell him the reason right now and begs him to let her go to Priyashi.

She goes to Priyashi's room and tells that they have to leave while packing her things.

Virendra tells others to go home as he will stay the night at the hospital.

They exit the room while Purvi hides from them and thinks that she has to get into Manas' room to complete her work.