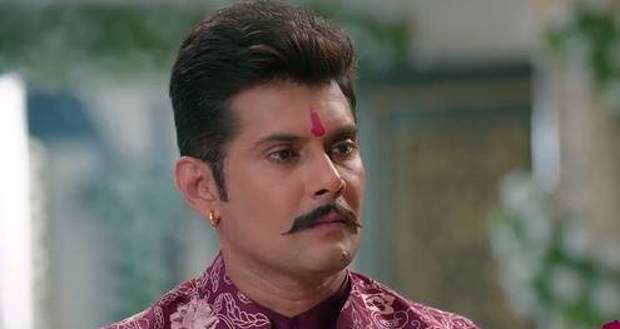 She further insults Purvi and says that a Molkki can never be the Mukhyain.

Later, Veer admires Priyashi playing with Juhi and Manas and gets distracted.

Meanwhile, Juhi and Manas refuse Nandini to play with them and she is about to slap Juhi but Purvi stops her hand suddenly. She scolds Nandini for trying to slap Juhi and tells her to never think of doing it again.

Afterward, Virendra, Veer, and Purvi are going to Panchayat while Virendra notices Choudhary Charansingh's jeep and drives towards it with full force but brush past them.

Purvi talks about it to Sudha who reveals Virendra and Charansingh's enmity. Sudha notices Aarav from the window and goes with Purvi to watch him but learns that he has gone towards the farm.

Purvi notices Aarav's picture as wallpaper and remembers that he is Charansingh's son and figures out that he might be Nandini's boyfriend.

Purvi fights with Virendra for not helping her set up their kitchen and leaves. Purvi cleans Nandini's room and sees a picture of her and Virendra which makes her happy.

Nandini shouts at her for entering her room without permission while Purvi informs her about Aarav's father.

© Copyright tellybest.com, 2020, 2021. All Rights Reserved. Unauthorized use and/or duplication of any material from tellybest.com without written permission is strictly prohibited.
Cached Saved on: Monday 6th of December 2021 01:30:40 AM