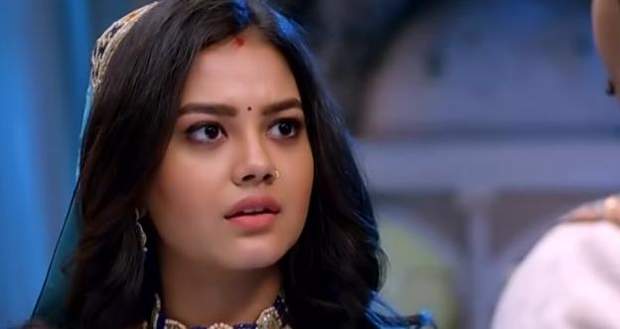 Today's Molkki 14 April 2021 episode starts with Purvi praising Virendra for winning the Wrestling championship while the driver informs them that the brakes of the car have failed somehow.

The car goes out of control while Virendra tells the driver to change seats with him.

Priyashi and Sudha bring Sakshi to the Haveli where they see Anjali coming and hide from her.

Virendra collides the car with a tree to stop it.

They reach home while Anjali and Jyoti get shocked seeing them.

Purvi gets Anjali out of their cell saying that she has realised how important family is and tells her to go to her room.

Sudha and Priyashi come there with Sakshi and they put her in the cell and leave after bidding her goodbye.

Later, Purvi does the kids and Virendra's Tika after which he does Purvi's Tika while they share a romantic moment.

Purvi tells the kids a bedtime story and puts them to sleep after which she thinks to go to the cell and give food to the lady.

Purvi sees Prakashi and hides from her while accidentally dropping an ornament.

Anjali comes there and takes away Prakashi while Purvi goes towards the cell.

Sakshi is singing the lullaby remembering her past moments with kids but stops hearing Purvi's footsteps.

Purvi feeds her while asking her if she could teach her the lullaby.

Sakshi sings the lullaby while Purvi wipes her tears and joins singing with her.

The next morning, Purvi removes the buttons from all of Virendra's Kurta's to prevent him from leaving.