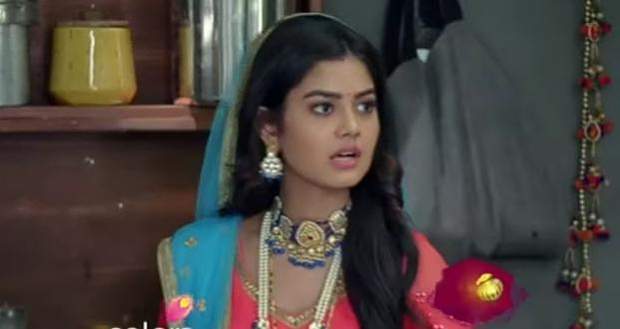 Today's Molkki 14 July 2021 episode starts with Purvi receiving Virendra's envelope and seeing that he has arranged the kitchen for her.

She thanks him and he cooks with her while telling her to not inform anyone that he did work in the kitchen.

Juhi and Manas come there and ask Purvi who did the kitchen and Purvi points at Virendra making him flustered.

She gives him the envelope and reads the note to learn that Charansingh has challenged him to win the next election for the position as Mukhya.

He destroys the letter while Purvi thinks to find out how deep is Nandini and Aarav's relationship.

Meanwhile, Veer goes to the photo studio to get his camera repaired and gets delighted to see Priyashi there who is with Sudha.

He clicks Priyashi's pictures and the photographer interrupts him after which Veer explains that he knows her and leaves telling Priyashi that he will see her in the mansion.

Sudha asks Priyashi about Veer and she reveals that he is Virendra's elder son.

Elsewhere, Purvi follows Nandini at night and thinks that Aarav loves her seeing how he decorated the whole place for his date with her.

Nandini and Aarav talk about their father's rivalry as he reveals that he wants to marry her with Virendra's permission only.

Later, Purvi informs the family about watching the film with village people but Nandini refuses to join them.

However, upon learning that Aarav will be there she comes along.

At the venue, Sudha introduces himself to Veer while he tries to talk to Priyashi but fails.

Nandini gets shocked seeing her favorite film playing and thinks that only Veer and Virendra know about it.

She recalls her moments with Virendra while Virendra realizes that Purvi planned everything.