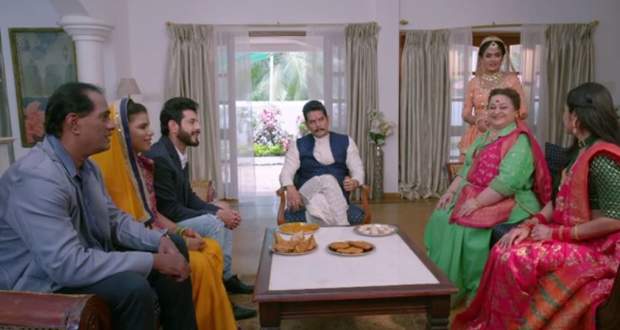 Today's Molkki 14 June 2021 episode starts with the kids telling Sakshi that she can't take Purvi's place and they refuse to let her go.

Sakshi gets upset while Purvi tells the kids that everything is happening with her consent and tried to console them.

Virendra talks to the kids while they refuse to understand the situation as he gets emotional.

He tells that they are doing it for Purvi's happiness as even she wants her own house and family.

Surprisingly, Purvi agrees to his words making him upset.

The kids agree but with three conditions of Purvi marrying someone from village, them visiting her anytime they wish and lastly, her always with their Haathi.

Later, Anjali tells Sakshi that she has the best guy in mind for Purvi and they plan to invite him and his family next day.

The next morning Sakshi gives a letter with the family members' important instructions to Sakshi for the future while she praises her.

The boy, Gaurav and his family come for the meeting and the family accepts Purvi after which they plan their engagement.

Meanwhile, the kids stare at Gaurav and remember something.

Prakashi and Anjali give money to a drunk Gaurav and talk about him selling off Purvi to Lalbar after marriage.

© Copyright tellybest.com, 2020, 2021. All Rights Reserved. Unauthorized use and/or duplication of any material from tellybest.com without written permission is strictly prohibited.
Cached Saved on: Wednesday 13th of October 2021 09:50:22 AMCached Disp on: Friday 22nd of October 2021 10:42:23 PM