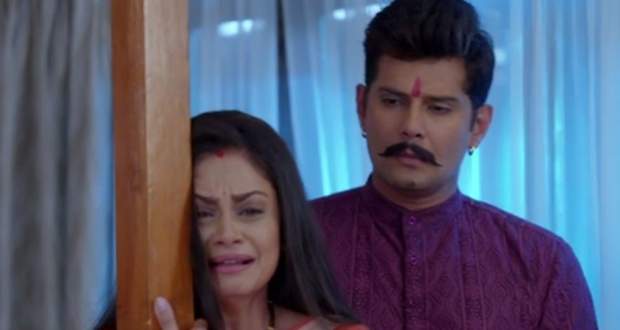 Today's Molkki 14 May 2021 episode starts with Sakshi asking if Purvi is Virendra's Molkki and leaves hearing Virendra says that he will explain everything.

Sakshi cries in her room while Virendra comes there as well and tries to comfort her but she tells him to not come near her.

She tells him that he has ruined her life and that she was wondering why a maid knows so much about the family but has now found out that Purvi is not a maid but Virendra's Molkki.

She tells him that she only thought about him and the kids in the last five years while he got remarried.

She accuses him of backstabbing her and breaks down saying that she has nothing left while Virendra tries to console her.

He tells her what had happened after the accident and how he was married to Purvi.

He tells her the hardships Purvi has endured and says that she is a good girl while Sakshi remembers Purvi helping her and agrees.

She says that a woman cannot share her husband with anyone and tells him to leave.

Purvi packs her bags while crying and remembering her wedding.

Purvi goes to Sakshi and tries to talk to her but Sakshi acts bitter towards her.

© Copyright tellybest.com, 2020, 2021. All Rights Reserved. Unauthorized use and/or duplication of any material from tellybest.com without written permission is strictly prohibited.
Cached Saved on: Friday 21st of January 2022 04:48:51 PM