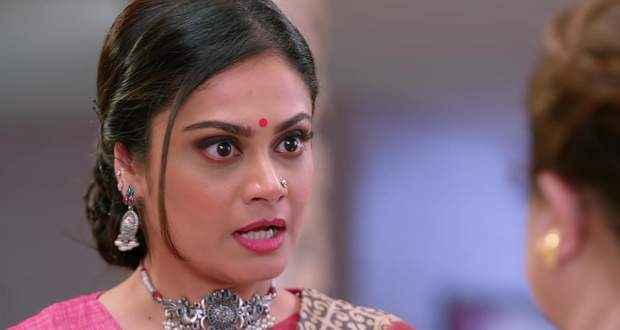 Today's Molkki 14 October 2021 episode starts with Arjun telling Purvi that he is giving her 24 hours to make her decision while she tells him that she will prefer death over marrying him and leaves from them.

The next morning, Purvi informs Sakshi of Arjun's demand and Sakshi takes her to Arjun's room to confront him.

She tries to slap Arjun but he stops her and suggests she convince Purvi to marry him while showing her the bullet saying that only the bullet can save Virendra.

Sakshi suggests to Purvi that they should steal the bullet from Arjun and tells her to not inform Virendra about anything.

Purvi goes to feed Virendra in the jail who tells her to not worry and gives her the custody papers of the kids.

At night, Purvi and Sakshi manage to steal the bullet from Arjun's room when he is in the washroom.

The next morning, Arjun asks Purvi about her decision when the bodyguards surround him.

Purvi tells him that she will prove Virendra innocent and won't marry him no matter what while showing him the bullet.

However, Arjun starts laughing and showing the real bullet reveals that he knew they might try to steal so me put the duplicate in place of the original bullet and threatens them saying that Virendra will die.

© Copyright tellybest.com, 2020, 2021. All Rights Reserved. Unauthorized use and/or duplication of any material from tellybest.com without written permission is strictly prohibited.
Cached Saved on: Wednesday 1st of December 2021 10:20:03 PMCached Disp on: Friday 3rd of December 2021 09:27:00 PM