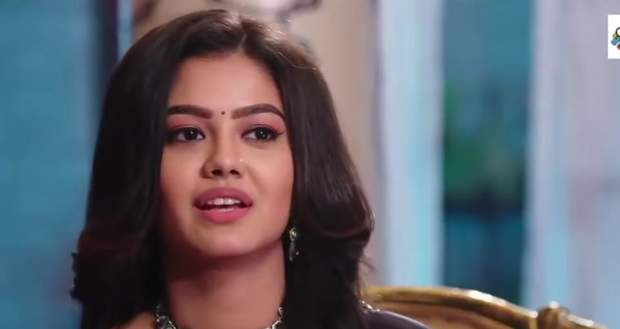 Today's Molkki 14 September 2021 episode starts with all the ladies coming to the haveli to see the moon and break the Karvachauth fast and blessing Purvi which makes her feel unusual.

The doctor informs Nani and Virendra that Nani is fine to go home but Nani refuses saying that she is feeling unwell and the doctor suggests keeping her overnight for observation.

Later, Chandni gets happy seeing Virendra there and tries to talk to him while the kids show him Purvi and he gets mesmerized seeing her.

Purvi asks Virendra about Nani and he tells her that doctor gave her sleeping pills so that she can rest and will wake up in the morning.

Sudha takes Purvi away saying that they need to start the ritual as the moon is visible now and goes with all the ladies.

Sudha does the ritual with Veer while Juhi drops a wallet and tells Daksh that his wallet has fallen.

Daksh bends down while Purvi sees Virendra from the net and gets flashes from her past.

Virendra manages to break Purvi's fast with the help of the kids while Sudha asks Veer for the bangles as a gift.

He gets shocked while she says that she was just kidding but wonders whom the bangles were for.

Meanwhile, Priyashi enters the haveli and slaps Purvi which shocks her as she starts rebuking her.

Virendra tells them that she is crazy and tells Veer to take her out while Sudha sees the bangles in the hands and gets shocked realizing that they are the ones that were in Veer's pockets.

Later, Virendra scolds his family and demands to know who let her inside the haveli while warning that it should not happen again.

Virendra apologizes to Purvi while she asks him if he is sure the girl was crazy and he says yes.

© Copyright tellybest.com, 2020, 2021. All Rights Reserved. Unauthorized use and/or duplication of any material from tellybest.com without written permission is strictly prohibited.
Cached Saved on: Monday 17th of January 2022 09:38:00 AM