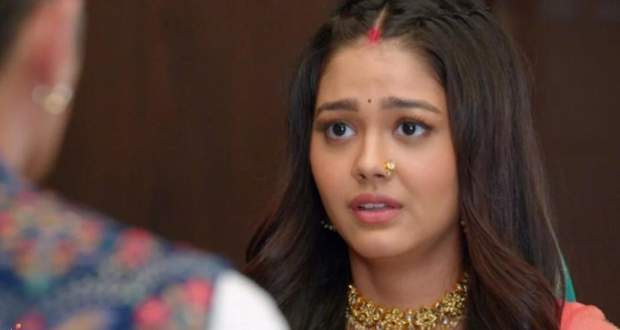 Today's Molkki 15 December 2020 episode starts with Prakashi preparing for dinner while the young man comes there saying he is hungry.

She addresses him as Vaibhav and tells him that he scared his mother by coming without notice.

Purvi tells Manas that she will complete this punishment with honesty while Virendra sees her from afar.

Anjali tries to throw Priyu out but Prakashi sees her and calls them in and tells Priyu to stay in the guest room.

Meanwhile, Purvi admires the paintings and Virendra tells him that there are of Sakshi which makes her think that he loved her dearly.

Anjali manipulates her words and tells Priyu that Purvi doesn't want to meet her.

Purvi brings ointment for Virendra and tells him to let her put it on him so that he doesn't feel pain while making the portrait and completes it on time.

Virendra thinks that she is right and agrees to it.

Purvi nervously taps her feet and Virendra asks him the reason to which she says that she wants to go to the washroom.

Meanwhile, Priyu looks for the kitchen to get water.

Purvi feels that someone is after her and sees red footprints in the hallway going to Sakshi's room.

Vaibhav pulls Priyu into her room.

Purvi runs seeing someone is after her and gets scared.

The person catches her and puts a knife near her throat while Purvi screams for help.

© Copyright tellybest.com, 2020, 2021. All Rights Reserved. Unauthorized use and/or duplication of any material from tellybest.com without written permission is strictly prohibited.
Cached Saved on: Saturday 23rd of January 2021 08:05:52 PM