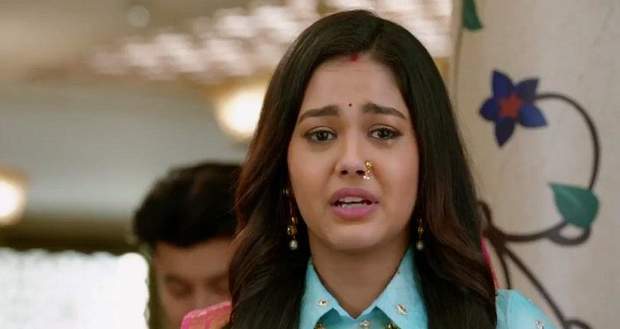 Today's Molkki 15 January 2021 episode starts with Purvi getting worried after reading the message while the kids hide.

Purvi looks for the kids while Virendra comes there with the family and the police.

She hides from him and tells Sudha to leave.

She hides while the Virendra shouts for kids to come out. Juhi is about to go to him but Purvi catches her and tells the Virendra to let them go.

However, Manas goes to Virendra while Purvi sees that Priyashi is caught by the police.

Police tell her to let go of Juhi and then brings out her and Priyashi.

Purvi suddenly snatches the gun tells Virendra to give her the kids while pointing the gun at him.

He denies and she tells him to let her and Priyashi go.

She tells the police to let go of Priyashi and they do while a constable aims the gun at Purvi but Priyashi saves her and gets her hand injured.

Purvi says that they have wronged and corners all of them and leaves while throwing a lot of boxes in the way.

Virendra rebukes the police while they leave in search of the sisters.

Purvi and Priyashi hide behind the grass while police trace the blood spots and follow them.

Police reach the grass but don't find them and leave while the sisters hide under the bridge.

Later, it is revealed that a female friend of Vaibhav is the one who threatened Purvi.

She calls her and tells her to leave the village if she doesn't want the video of Priyashi to be leaked.

Elsewhere, Virendra imagines Purvi having conversation with him and wonder how he will forget her.