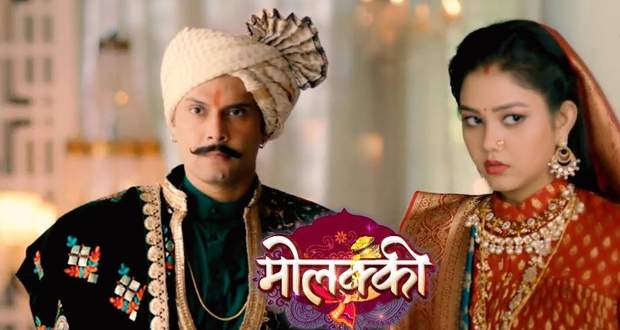 Today's Molkki 15 June 2021 episode starts with Manas and Juhi going somewhere and hoping that the family doesn't notice that they are gone.

Meanwhile, Purvi gets permission from Sakshi to go to meet Virendra.

She offers tea to Virendra while he thinks that it is Sakshi and refuses.

However, Purvi reveals herself and talks to him while he confesses that he cannot live without her and is hoping that her marriage stops somehow.

She tells him to not keep hope and be strong for her as she will fall apart if he isn't strong.

The kids show Gaurav's picture to a girl and later convince her to help them.

Later, they manage to convince Sakshi to invite the gardener's daughter, Champa to the function.

Everyone prepares for the function and the priest starts the rituals while Virendra gets hesitant.

Manas goes, to tell the truth to Purvi but Sakshi stops him and tells him to not interfere with the engagement.

The engagement is about to complete while the kids eagerly wait for Champa.

She comes there and stops the marriage saying that Gaurav's real name is Rakesh and that he molested her and tried to kill her upon finding out that she is pregnant.

She further reveals that she had complained a file against him and Virendra calls the police.

He beats her up and the police take Rakesh away while Sakshi realises that the kids lied to her and hid the truth purposefully.

© Copyright tellybest.com, 2020, 2021. All Rights Reserved. Unauthorized use and/or duplication of any material from tellybest.com without written permission is strictly prohibited.
Cached Saved on: Monday 17th of January 2022 09:49:43 PM