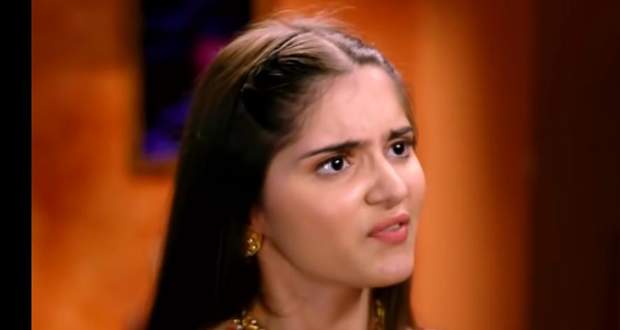 Today's Molkki 15 September 2021 episode starts with Virendra telling Purvi that Priyashi is just a mentally ill person and tells her to not think about her.

Elsewhere, Veer apologizes to Priyashi for dragging her out of the haveli and informs her about Daksh and Purvi's wedding while Priyashi thinks to ruin Purvi's life.

The next day, Purvi requests Daksh to take her to the village to meet the girl who slapped her and he agrees while Anjali overhears them.

Sudha questions Veer about having an affair with Priyashi and he agrees feeling her to never expect him to accept her as his wife which shatters her.

Purvi and Daksh reach Priyashi's house and get shocked to see Anjali and Prakashi there who tell them that they were there to look for the crazy girl to help her but she is not her home.

Elsewhere, Priyashi threatens Virendra to reveal the truth to Purvi while he also threatens her and tells her to leave Rewari.

Later, Daksh and Purvi's Haldi ceremony is going on while Nani stops Virendra from applying Haldi to Purvi saying that he can't do it because of their rituals.

However, Virendra lies that people celebrate Haldi as Holi in Rewari and everyone starts celebrating while Virendra applies Haldi to Purvi and they play hold like before.

Meanwhile, Priyashi manages to get inside the haveli by camouflaging with the dancers.

Daksh gets confused about his own thinking seeing Purvi and Virendra close while Priyashi tells him the truth of their marriage shocking him.