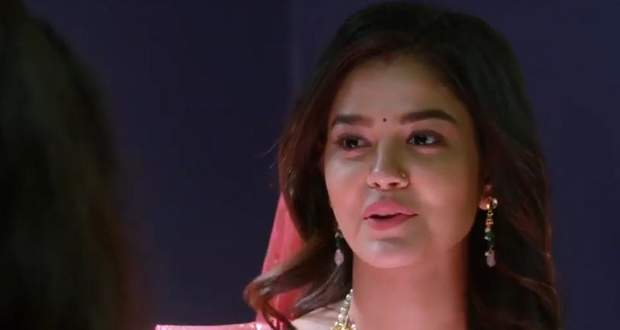 Today's Molkki 16 April 2021 episode starts with Prakashi telling the Panch that Purvi robbed her own house and request them to give her a hard punishment.

Sakshi is admiring her bangle's while Purvi comes there with food and tells her to eat.

She asks Sakshi why she isn't eating and removes her hands from behind but gets shocked seeing the keys and bangles.

Virendra looks for Purvi while she manages to get both the keys and bangles from Sakshi.

She goes to Sakshi's room and is putting back the jewellery when Virendra sees her and confronts her.

She is trying to explain herself when Anjali come there and starts taunting her.

Purvi thinks to not talk about the lady in front of her and request Virendra to trust her.

Virendra tells her that he believes her but Panchayat will have to be called in as theft was involved.

He tells her to not worry as he will put forth her case and leaves.

In the early morning, two men come to Bheem and tell him something after which they go to Virendra's room and plan to leave immediately.

Virendra writes a letter to Panch to give an easy punishment to Purvi and tells Bhuri to give it to them.

Bhuri goes to Prakashi and she destroys it.

Virendra and Bheem reach the Sakshi mill and get shocked to see it intact while telling the caretaker that he was informed of a fire.

They find out that the person who informed them about the fire has been fired for some days.