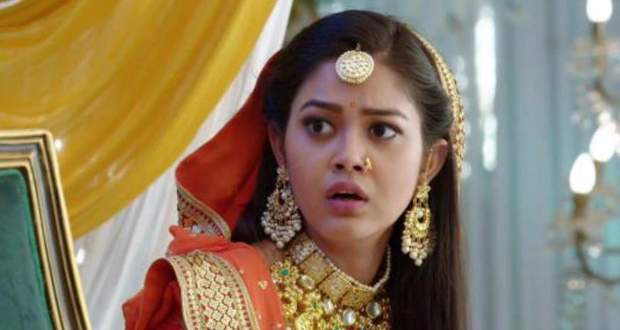 Today's Molkki 16 December 2020 episode starts with Purvi saving herself from the attacker and the attacker running away through the window.

Anjali sees Priyu coming from Vaibhav's room and gets curious.

Purvi tries to tell Virendra about the attack but decides against it.

Manas accuses Juhi of doing wrong to Purvi and goes to tell Virendra the truth while Juhi cooks up a plan.

Meanwhile, Sudha walks with a limp and Prakashi asks her about it.

Purvi splashes water on Virendra's face to wake him up while Virendra's uncle watches them banter.

Sudha sees Purvi through a window and says to herself that she knew Purvi was being punished by Virendra.

Later, Juhi calls Purvi to her with a sign saying Help and revealed to her that she was the one who caused the fire.

Manas comes there to tell Virendra the truth but Purvi stops him and tells him to not tell the truth to Virendra as it will hurt Juhi.

Prakashi requests Priyu to go to the market with Vaibhav for getting the essentials for Pooja.

Priyu lies to Prakashi that she is feeling sick and goes upstairs while Vaibhav looks on.

Elsewhere, Virendra and Purvi ask each other questions while bantering.

Virendra tells her to go to the godown and get paint and tells her to be cautious a the ceiling is weak there.

Purvi goes to the godown and looks for paint while someone tries to make the ceiling fall by hindering it.

Upcoming Molkki episode update: Purvi to get stuck under the fallen ceiling.