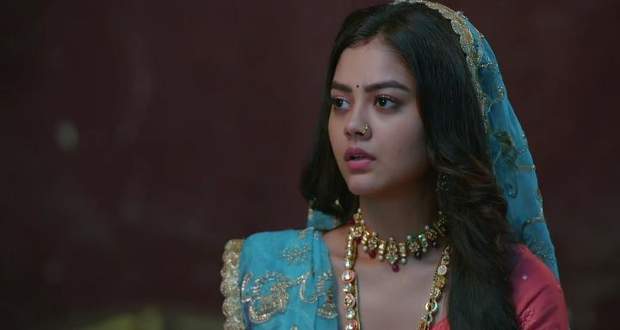 However, Virendra tells him that Nandini won't let him face humiliation and leaves asking him to tell Aarav to stay away from Nandini.

Purvi thinks that Virendra is wrong by bringing his rivalry between Aarav and Nandini when Virendra comes there.

However, he leaves threatening her to not support Nandini or their relationship will suffer because of it.

Meanwhile, Nandini finds out from Aarav about the argument between their fathers and tells him that they will marry that day itself so that no one can separate them.

However, Virendra overhears and argues with Nandini while she pushes him and a vase falls on his leg.

He tries to stop Nandini but she leaves.

After a while, the doctor informs that Virendra has fractured his leg and will need rest for 2-3 weeks.

Aarav takes Nandini to his house while Purvi goes there in disguise to find out how they react to Nandini and Aarav's relation.

However, Charansingh and his wife accept their relationship immediately and even support them.

Later, at home, Nandini asks Purvi about Virendra and says that he deserves it.

© Copyright tellybest.com, 2020, 2021. All Rights Reserved. Unauthorized use and/or duplication of any material from tellybest.com without written permission is strictly prohibited.
Cached Saved on: Thursday 2nd of December 2021 12:27:21 PMCached Disp on: Monday 6th of December 2021 02:11:54 AM