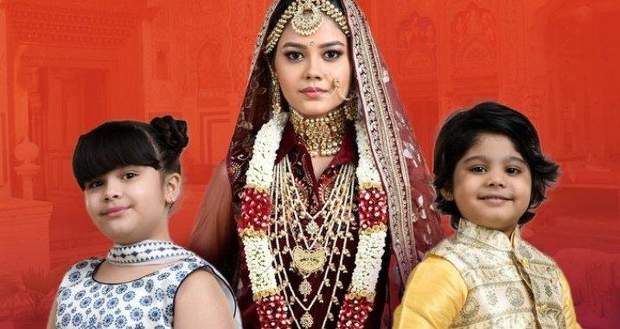 Today's Molkki 16 June 2021 episode starts with Sakshi going to the kids and asking them why they hid the truth about Gaurav from her.

They reveal that they feared she won't believe them and hence brought Champa there as a solid evidence.

The next morning, Sakshi, Purvi, and the kids are seeing Anjali work in the garden from the balcony and feel happy about Virendra's punishment.

Virendra goes to Anjali and tells the gardener that Anjali will do all the garden work from now on while Anjali leads with him to forgive her.

Later, Prakashi tells Virendra to get the wires in the godown.

Purvi plays with the kids while Virendra feels happy that his wish got completed.

Sakshi apologises to Purvi while Purvi tells her to not apologize as it's not her fault.

Afterward, Virendra's lawyer informs him that his divorce will be finalized in two weeks while Sakshi thinks to get Purvi married in two weeks.

He bumps into Purvi and expresses him feeling grateful for the cancellation of her wedding but Purvi tells him to forget her.

She gets a call from Priyashi who says that she has come to Goa to meet her and has brought a friend along with her.

Purvi goes to the godown to get something for the kitchen while Priyashi and her friend arrive.

However, the wires create a fire and trap Purvi inside while the family notices the fire and shouts for help.

© Copyright tellybest.com, 2020, 2021. All Rights Reserved. Unauthorized use and/or duplication of any material from tellybest.com without written permission is strictly prohibited.
Cached Saved on: Tuesday 7th of December 2021 11:37:04 PM