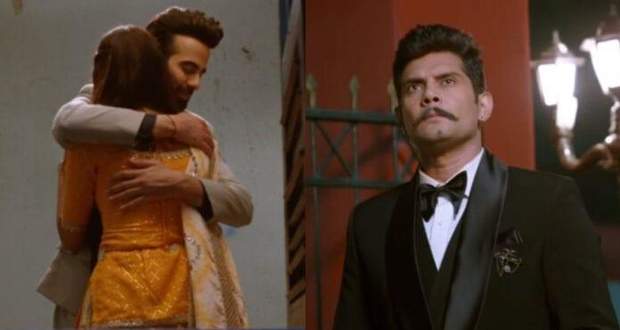 Virendra sulking says that Purvi is enjoying with her friends and isn't missing home or kids while Prakashi notices that his eyes have become watery.

Prakashi faking consoles him while he goes after which she says that it is just the beginning of her plan.

Elsewhere, Karan and Naina get intimate.

Purvi reaches home and goes to sleep in the kids' room knocking on Virendra's room several times but not getting a response.

The next morning, Purvi is showered with rose petal and kisses from the kids while they wish her a happy birthday.

They take her downstairs to show the decorations while Prakashi gives her Prasad.

Purvi tells her that Virendra is upset with her while Prakashi says that she is sure that she will pacify him.

Purvi goes upstairs to get ready while Prakashi thinks that she is waiting for the evening.

Virendra remembers what he saw last night and angrily throws things while Purvi comes there and asks him why he is angry.

She asks him why he left without her while he says that she was the one who left the party without him.

Purvi is about to tell him where she went but recalls making a promise to Naina and stops.

However, the kids come there and make them hug and forces him to wish her a happy birthday.

Purvi thinks that he is angry because she left him alone at the party and plans to apologise to him.

Later, she wears the necklace gifted by him and tries to gain Virendra's attention.

Juhi asks if they fought while they deny after which the kids make them hold each other's hand and come downstairs.

He tries to free his hand while she holds it tightly and apologies to him.

Karen gets close to Purvi's ear and tells her that he has deleted all the pictures from Suraj's phone while Virendra gets angry.

Purvi goes to wash her face.

© Copyright tellybest.com, 2020, 2021. All Rights Reserved. Unauthorized use and/or duplication of any material from tellybest.com without written permission is strictly prohibited.
Cached Saved on: Thursday 29th of July 2021 12:49:15 AM