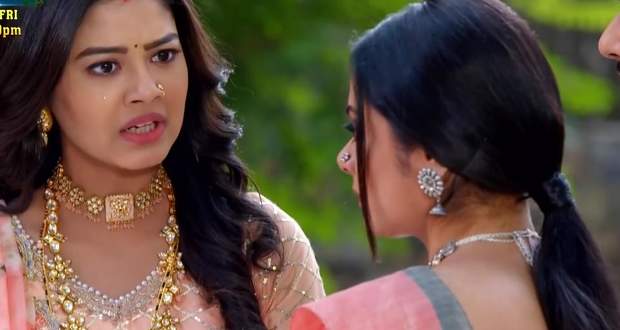 Today's Molkki 16 November 2021 episode starts with Purvi asking Virendra for a gift while the kids come there and tell her to apply Haldi on them too.

She asks the kids for gifts while they gift her chocolates and bangles.

Purvi teases Virendra and asks him to gift her something unique and he later tries to seek help from kids but they refuse.

They rush downstairs by making an excuse that she is waiting for them for breakfast while he forms a plan.

Later, he gifts her a Kamarbandh and puts it around her waist while getting romantic with her.

Afterward, everyone lights crackers on the occasion of Diwali and celebrates.

The next day, Virendra brings a form to Purvi and tells her that the Panch wants a female Mukhiya this time and he has suggested her name.

She refuses at first but he manages to convince her that she is the best candidate for the position.

Later, they reach the office to submit the form along with some village ladies who inform them that they are taking back their name to have Purvi as their Mukhiyain.

Everyone starts cheering Purvi's name and the officer is about to announce her as the winner but Sakshi comes there just then and announces that she is going to compete against Purvi in the elections.

Virendra questions her about how she got bail while she reveals that Arjun took all the blame on himself and that she is free from now on.

Later, Virendra reaches home and asks for his gun saying that he will kill Sakshi before she can do anything to her but Purvi manages to convince him to stop and fight against Sakshi and not become violent.

© Copyright tellybest.com, 2020, 2021. All Rights Reserved. Unauthorized use and/or duplication of any material from tellybest.com without written permission is strictly prohibited.
Cached Saved on: Thursday 20th of January 2022 04:58:10 AM