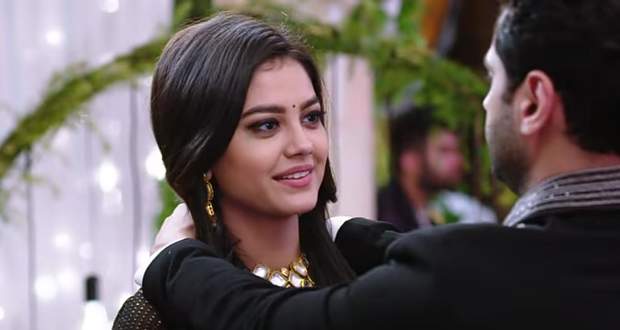 Today's Molkki 17 August 2021 episode starts with Purvi agreeing to help Daksh by acting as his fiancee while Virendra talks to someone.

Purvi says that she's grateful that Daksh helped her when her accident happened and even took her in as his family by giving her the name Dhwani.

Daksh and Purvi go towards the centre to announce while Chandni talks to Virendra and he gets distracted.

He gets a call from Prakashi and he leaves while Daksh announces his marriage with Purvi saying that she has accepted his proposal.

He sees a crowd gathered around Daksh leaves while sending a message to inform him that he is leaving his party.

Purvi goes to the terrace and thinks if she did right by agreed to act as Virendra's fiancee while Virendra sits in his car.

Purvi's scarf flies away and goes to Virendra making him remember his past with Purvi.

Purvi runs after Virendra's car but he doesn't see her and drives away.

The next morning, Daksh pranks Purvi and wakes her up after which he convinces her to change her dressing style to impress Nani.

Elsewhere, Virendra scolds Manas, Juhi and tells them that he has decided to admit them to a hostel in Delhi as they share an emotional moment.

© Copyright tellybest.com, 2020, 2021. All Rights Reserved. Unauthorized use and/or duplication of any material from tellybest.com without written permission is strictly prohibited.
Cached Saved on: Thursday 27th of January 2022 02:04:51 PM