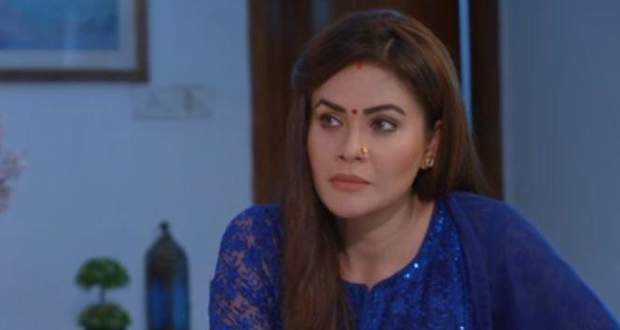 Today's Molkki 17 June 2021 episode starts with Purvi falling unconscious while Vipul picks her up and gets out of the storeroom.

Sakshi asks about him while Priyashi informs that he loves Purvi and is her first love.

Meanwhile, Vipul makes Purvi sit in a chair and faints.

The doctor treats him while Sakshi thinks that he is the perfect groom for Purvi.

Vipul regains consciousness and Sakshi thanks him for saving Purvi while Priyashi happily reveals that he has secured a job in Goa.

He talks about leaving but Sakshi manages to convince him to stay with them until he is well.

Later, Sakshi asks Priyashi about Vipul and finds out that he and Purvi loved each other and their whole story.

Meanwhile, Virendra talks to Mr. Gupta about the new manager while Sakshi comes there and informs him about the incident.

She tells him that Purvi and Vipul used to love each other and takes him to meet Vipul while Virendra gets shocked.

He recalls seeing Vipul and Purvi together while thanking him for saving Purvi's life.

Prakashi asks Anjali about Vipul while she reveals that she is the one who got him a job in Goa as the manager and has formed a plan for it.

Later, Sakshi talks to Virendra about Vipul and Purvi's marriage while he tells them that they check him first.

However, Sakshi tells him that Purvi and Vipul know each other from childhood so it won't be a problem.

© Copyright tellybest.com, 2020, 2021. All Rights Reserved. Unauthorized use and/or duplication of any material from tellybest.com without written permission is strictly prohibited.
Cached Saved on: Tuesday 27th of September 2022 05:07:08 PM