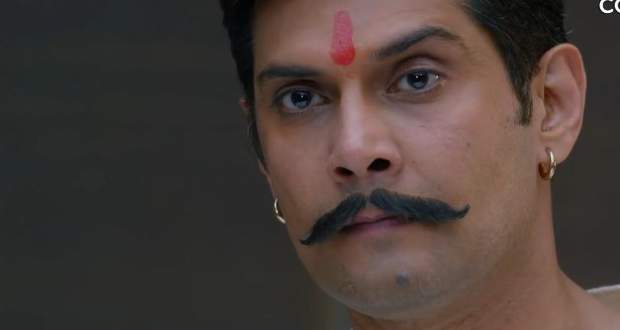 Today's Molkki 17 March 2021 episode starts with Virendra remembering Karan putting the cake on Purvi's face while a lady comes there and tells him that he is lucky to have a wife like Purvi.

Karen comes there amd tells Virendra that he is really lucky as he would do anything to have a wife like Purvi.

Virendra gets angry and tells him that he is uninvited while Karan says that he is invited by a very special person.

Anjali gathers everyone and says that she and the kids have prepared a video for the birthday girl, Purvi and starts the video.

The video shows the family members wishing Purvi a happy birthday while the screen goes off suddenly and a video of Karan and Purvi getting intimate is shown.

Purvi covers the kids' eyes while Prakashi fakes being shocked as Anjali and Karan skirt at each other.

Virendra throws the vase across the street while Anjali starts rebuking Purvi who keeps saying that she is innocent.

Purvi tells Anjali to ask Karan and searches for him but doesn't find him while she starts hysterically crying.

Purvi tries to tell Virendra that she is innocent while he slaps her and tells her to not touch him ever again.

He goes while she pleads with him to believe her and cries.

Later, Prakashi is eating cake while looking at Vaibhav's picture while Anjali comes there and says that her plan worked like a charm.

Viremdra is roaming the streets with tears in his eyes while remembering Purvi with Karan while Purvi sits crying in her room.

The kids come to Purvi and tell her that they will not talk to Virendra as he slapped her while Purvi tells him that their father is the best.

Virendra comes home and Purvi tries to talk to him while he says he doesn't even want to look at her face.

She asks him if he is doubting her character while he says that she became characterless which creates an argument between them.

Prakashi suggests Virendra call the Panchayat for this meeting which shocks Purvi.