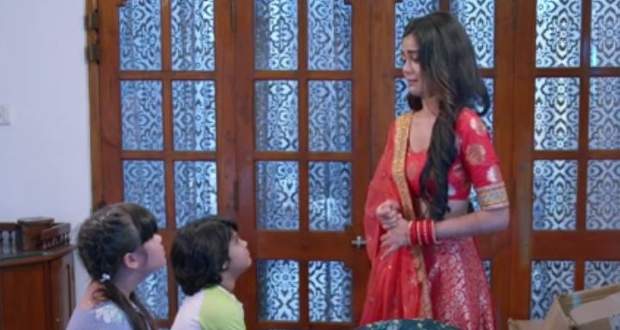 Today's Molkki 17 May 2021 episode starts with Sakshi refusing to listen to Purvi who tells her that she never wanted anything like this to happen.

She tells Sakshi that she never tried to take her place while Sakshi states that she has fallen in love with Virendra.

Purvi denies her statement and says that she will leave in the morning and goes to her room.

Manas and Juhi request Purvi to stay and cry while Purvi tells them that two mothers cannot stay under one roof.

The kids go to Sakshi and tell her to stop Purvi but leave getting upset with Sakshi's response.

The next morning, Purvi comes to the hallway and starts leaving while Virendra tries to stop her.

However, Sakshi drags Purvi inside the house and announces that she has to stay with them as she is Virendra's Molkki and states that Purvi is her responsibility from now on.

The kids thank Sakshi and leave with Purvi while Prakashi and Anjali get angry.

Virendra tells Sakshi that she didn't change and tries to talk to Purvi who ignores him.

Meanwhile, Prakashi tells Anjali to get ready to watch the drama.

© Copyright tellybest.com, 2020, 2021. All Rights Reserved. Unauthorized use and/or duplication of any material from tellybest.com without written permission is strictly prohibited.
Cached Saved on: Monday 3rd of October 2022 05:29:52 AMCached Disp on: Friday 7th of October 2022 03:24:31 PM