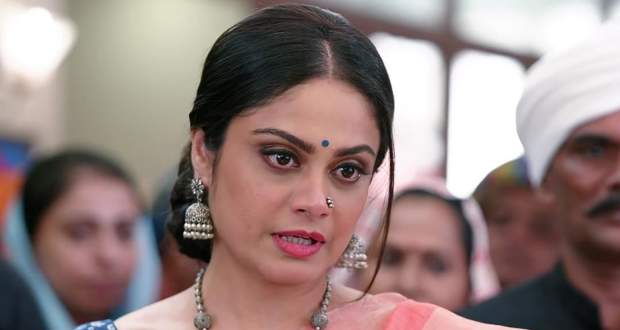 Today's Molkki 17 November 2021 episode starts with Purvi promoting herself for the election with Virendra while Sakshi comes there in the jeep.

She sees her kids and talks to them but the kids say that they will support Purvi only and leave with them.

Further, Purvi helps a pregnant lady while Sakhi gets her picture taken with the villagers as Virendra praises Purvi.

Later, Sakshi gives a speech that she came as a daughter-in-law to the village and argues that she should be the Mukhiyani and not a Molkki.

However, Purvi gives a strong speech and reminds how Sakshi put Virendra online to get hanged and how she was the one who saved him.

Sakshi questions Purvi's dignity but Purvi stands up for herself and says that Sakshi cannot be trusted as she killed her unborn child in her womb to get revenge.

Afterward, the villagers give their votes and officials count the votes while Purvi, Virendra, Sakshi, and others wait for the results.

The official comes to the stage and announces that Sakshi has won the elections while Virendra demands a recount and goes with the officials for the recounting.

Sakshi again wins the recount and taunts Virendra while flashback shows Sakshi bribing the peon to change the ballots of votes and burning the actual votes.

Meanwhile, Prakashi and Anjali come there and congratulate Sakshi and insult Purvi and saying that everyone remembers the rising sun.

© Copyright tellybest.com, 2020, 2021. All Rights Reserved. Unauthorized use and/or duplication of any material from tellybest.com without written permission is strictly prohibited.
Cached Saved on: Friday 21st of January 2022 05:19:47 PM